Conventional rechargeable batteries have typically been the main option for anyone wanting to store electricity generated by renewable installations.

While battery storage is developing fast as technology improves and costs fall, a relative new technology to the UK market promises a potentially more rugged solution that does not degrade with continuous use.

So-called “energy storage machines” were launched by RedT last year and use a liquid vanadium (a type of malleable metal) electrolyte to store electricity, rather than lithium-ion or lead acid as in a standard battery.

Unlike conventional batteries, which lose a small amount of efficiency after every charge, vanadium does not degrade or lose charge, which means systems can remain fully charged for long periods, even several years, the firm claims.

RedT’s energy storage machines are a containerised, modular system that can be retrospectively connected to most types of power-generation project and scaled according to electricity needs.

Each module comprises an electrolyte tank and power cell stacks with positive and negatively charged sides separated by a permeable membrane which acts as the “engine”.

During the charge cycle, vanadium electrolyte is pumped around the stack allowing electrons to be transferred across the membrane to store electricity within the cell.

The reaction is reversed to release electrical current during the discharge cycle.

This reversible process is known as a “redox” reaction.

The technology suits industrial applications requiring discharge cycles of three hours or more on a daily basis but is less appropriate for occasional, rapid, high-power charge/discharge cycles for short periods (for example, domestic backup). Conventional lithium-ion batteries may be better in such situations.

While the system can be scaled to various capacities, Mr McGregor says ideally a minimum of 100kW local electricity demand is required to be financially feasible and upwards of 150kW of on-site generation (solar or wind).

Smaller systems are possible but the economies of scale are not so great and payback takes longer, says Mr McGregor.

Equipment typically costs £400/kWh to £700/kWh, depending on capacity, with installation adding another 5-10% of the total cost for a small system and 2-5% for a larger one. A rental option is also being considered.

Because vanadium does not degrade, Mr McGregor says systems should last 20-30 years and retain a residual value for the vanadium at the end of the lifetime.

Maintenance is fairly straightforward, he says.

Protecting containers against rust and ensuring pumps, fuses and other electrical components are working effectively are the main issues to focus on.

RedT typically charges an annual maintenance and monitoring fee of 1-2% of system cost and offers a 10-year warranty, but is considering extending this to 20 years.

Mr McGregor advises anyone considering a storage system to check with their local planning department to see if planning permission is required.

The electricity distribution network operator must also be notified, although a full grid application is not normally required, he says.

“Grid constraints are a major issue in some areas such as the south-west, where it’s now almost impossible to connect new solar without storage.

“Adding energy storage may help to get a new generating installation approved as it makes it easier to manage the flow of power to the grid.”

It may also open up other opportunities for grid balancing or power trading, he says.

Storing energy in vanadium was invented in Australia during the 1980s. After the patent on that system expired in early 2000s, several firms have launched commercial systems, with a few hundred operating worldwide. RedT has 40-50 operational systems in Africa, UK, Germany, Portugal and Ireland. 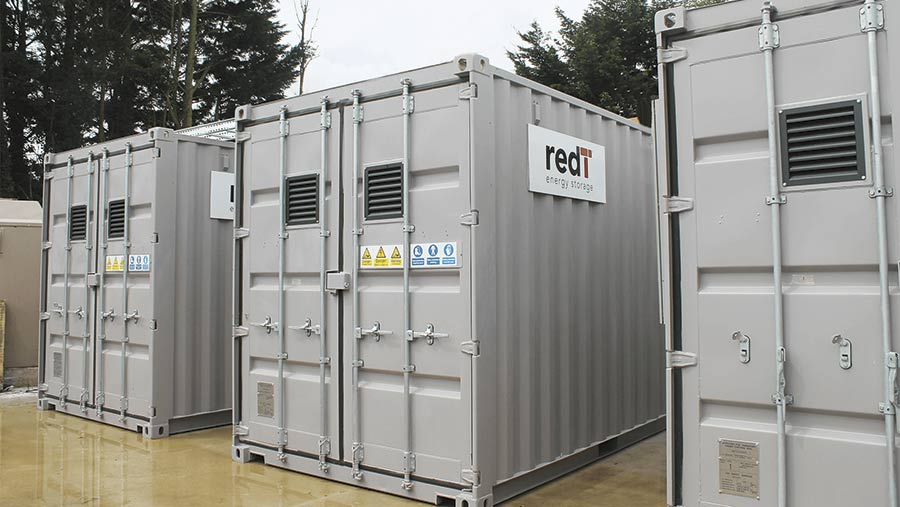 One of the first UK businesses to install a large-scale RedT vanadium system was the The Olde House farm holiday site in north Cornwall, part of an arable and livestock family farm run by the Hawkey family.

The 90kW system stores electricity generated by two ground-mounted solar PV arrays with a combined capacity of 350kW. It can supply about 1.08MWh of energy, equivalent to the demand from 30 standard homes for 10 hours.

At The Olde House, solar electricity generated during the day is stored to supply 38 holiday homes during the evening when guests return and demand increases. It is expected to save up to 50% on grid imports during peak time.

“We are always looking to make our business as stainable as possible and these energy store units are a big step towards this,” said Shaun Hawkey, who runs the holiday business.

The project is supported financially by Centrica as part of its Cornwall Local Energy Market initiative. Centrica is also exploring other ways to maximise revenue from the storage system, such as energy trading with local businesses and the grid, and by providing frequency response services or short-term operating reserve to help balance grid supplies.