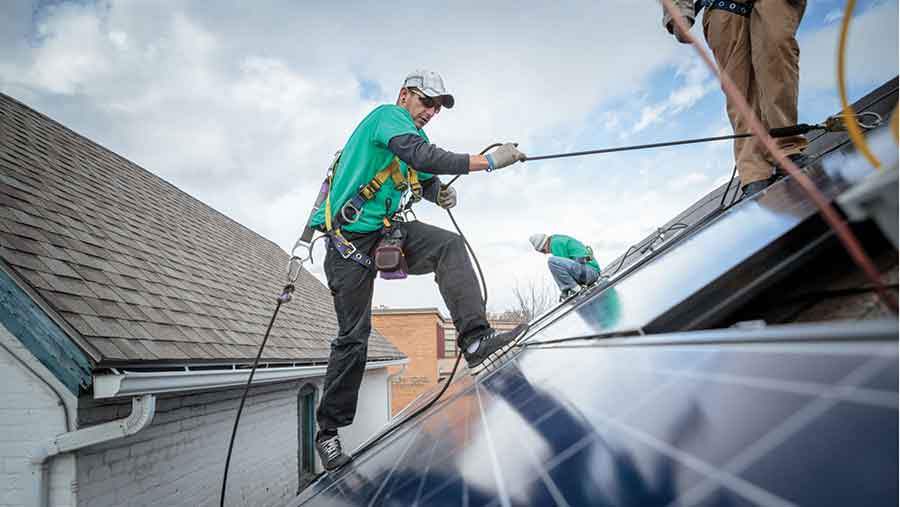 The number of new renewable energy projects getting under way has nosedived over recent months as financial returns and investor confidence have been hit by policy reforms and support cuts.

But while returns are lower than at the peak of Feed-in Tariff and Renewable Heat Incentive support, and policy uncertainties remain, there are still opportunities for farmers to invest, Strutt & Parker’s head of energy Alexander Creed says.

It does, however, require a move away from developing projects based around the support available, towards integrated energy projects closely matched to the demands of the farm business, he says.

Simply installing a system that exports most energy to the grid is not financially viable.

Measuring and assessing energy requirements across the business and developing projects tailored to meet these needs could help farms and rural businesses become “energy islands” that are more self-sufficient in heat and power, says Mr Creed.

However, margins are tight, so some technologies will appeal more than others.

Cuts to FiTs support and rationalisation of the sector have created a perception that solar returns have vanished, but this is not the case, says Mr Creed.

A typical 50kW roof-mounted solar array where at least 50% of electricity is used on-site should still give a return of 5-7%, as costs have fallen alongside support payments.

He acknowledges there has been a recent upturn in costs due to sterling weakening and continued tariffs on solar panels imported into Europe. A typical 50kW system is likely to cost around £55,000 installed, he notes.

Displacing as much bought-in electricity as possible is the best way to improve payback, so intensive users such as those with cold stores or milking parlours could benefit most. 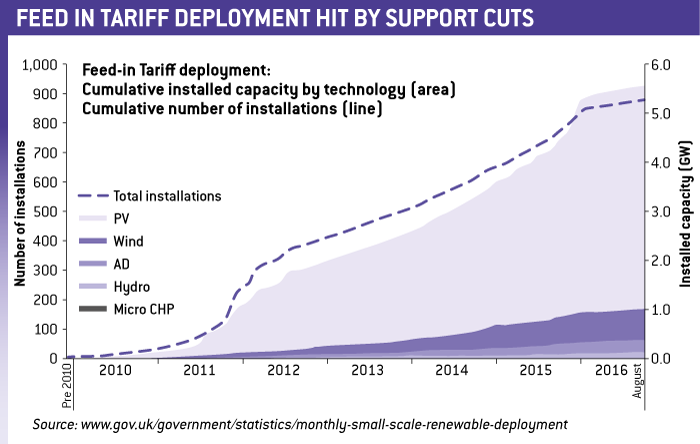 Future advances in battery storage technology and cost reductions also offer opportunities to improve the profitability of solar arrays by allowing surplus electricity generated at peak times to be stored and used later rather than exported to the grid.

Mr Creed suggests it is likely to be another 18 months before battery storage becomes economically viable for farmers, but says it is worth preparing by checking whether equipment (particularly inverters) is compatible with battery storage.

Developer interest in rooftop rental or large ground-mounted solar farms has almost dried-up, he adds, although a few firms have earmarked large 100 to 300-acre sites to build subsidy-free solar farms on over the next two to three years, once through the planning process.

There may also be some proposed solar developments that were unsuccessful in obtaining Contracts for Difference funding that come back to the fore in coming months as different funders take on the projects, he suggests.

Any landowners with such sites are advised not to be rushed into signing agreements or pushed into accepting lower rents.

There is very little new investment in onshore wind and the lack of government support means times remain tough in this sector.

The recent collapse of Canadian turbine manufacturer Endurance and a warning by Scottish Power that onshore development could stall if government does not commit to its future illustrate the pressures.

S&P energy engineer Kieran Crowe advises existing turbine owners to check warranties and be clear who supports them, whether it is the turbine manufacturer, or individual component providers.

He also stresses the importance of continual maintenance to reduce potential problems and to monitor turbine performance closely to quickly identify any drop in output due to technical issues.

Turbine owners should have full access (dashboard level and engineers access) to monitoring systems as this gives more freedom and saves time when looking for alternative operation and maintenance providers.

The ongoing wait for a government decision on the RHI following a consultation earlier this year has stifled investment in AD, although projects already in the pipeline are still being built.

While much depends on the government decisions around support, Mr Creed remains confident there are future biogas investment opportunities.

Crop-based feedstocks have come under scrutiny, but he says these are still likely to be needed in new plants as it is difficult to secure enough waste to run a large-scale plant on waste alone.

Watch out for more in Farmers Weekly about on-farm AD from the ADBA conference in a fortnight’s time.

Mr Crowe says there is currently a “gold rush” to get new biomass systems installed before RHI support changes next April when existing tariffs are expected to be replaced with a flat rate payment worth 2.8p/kWh.

Despite this anticipated cut, he says there is still a promising future for biomass, providing schemes are designed and engineered to displace as much bought-in energy (heating oil, for example) as possible. Rising oil prices will further improve viability.

“Depending on the fuel you’re replacing, biomass is viable without subsidies. We’re not talking about double-digit returns anymore, but 7-8% is realistic next year.”

Policy is tied up within EU regulations, but the UK has led on setting much of this so targets are likely to remain, regardless of Brexit considerations, he says.

Official figures show just 1,040 non-domestic RHI applications for ground/air/water-source heat pumps were submitted between November 2011 and October 2016, around 7% of the total. In contrast, small and medium biomass boilers accounted for 87% of applications.

But both experts believe heat pump technology is a good option and farmers with available land adjacent to properties are in a good position to utilise it.

Problems are often caused by faulty installation rather than the technology, says Mr Crowe.

A typical 20kW ground-source heat pump system costs around £20,000 to install and requires an area for the collectors roughly equivalent to the footprint of the property being heated, he says.