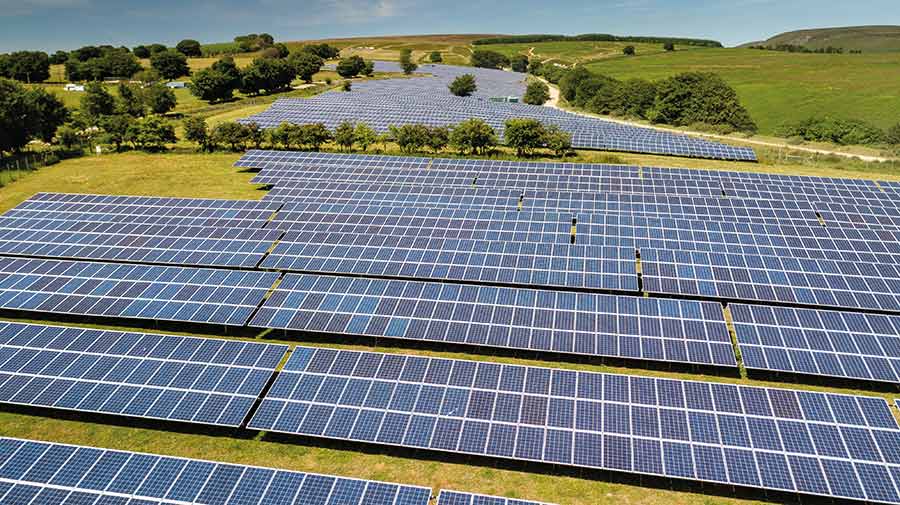 Planning permission for in-field solar farms on Wales’ most productive land looks set to be refused after the Welsh government stepped in with advice to planners.

Under current rules, local planning authorities in Wales must consult with the government before granting planning permission for solar array developments on 20ha or more of agricultural land classed as best and most versatile (BMV) – Grade 1, 2 and 3a land.

See also: Solar farm leases – what you need to know

New guidance has now been issued to all chief planning officers, stating that the Department for Climate Change will object to solar development on BMV land unless “other significant material considerations” outweigh the need to protect that land.

The government says it has stepped in because BMV land is considered best for growing future crops for food and for non-food uses such as biomass, fibres and pharmaceuticals.

“It’s a long-term, natural resource important for future sustainability, but only accounts for 10-15% of the land area in Wales,” said a government spokesperson.

But the government’s intervention has sparked concern about the impact the policy has on the rights of farmers to diversify into solar energy, and there is criticism that the advice is at odds with the government’s own policies on climate change and energy security.

Soil scientist Bill Butterworth said two-thirds of BMV land in Wales is down to grassland anyway, because of challenges with growing cereals in a climate of high rainfall.

Solar development would therefore have little impact on food security, he insists, pointing out that should the land be needed for food production then panels can be removed.

“The land can be restored to its original status of productivity, and it can be argued that it will be just as fertile as if it had been under permanent grassland,” said Mr Butterworth.

But the farm unions support the government’s position.

The Farmers’ Union of Wales (FUW) said it welcomed the government’s recognition of the need to support food production, pointing out that solar panels can be installed on roofed buildings and houses, without the need to sacrifice productive land.

FUW policy officer Teleri Fielden added that the union had also urged the government to “use the planning tools at their disposal” to protect rural communities and farms from land acquisition for carbon offsetting projects.

Although England has different guidance to Wales, approval to turn highly fertile fields into solar farms is rarely granted, with the system favouring land that is low-yielding or used only for grazing.

Jack Pugsley, an associate director in the planning team at land agent Savills, said although the need for developing sites in appropriate locations was undeniable, there was a case for using BMV land for a temporary period, maybe 30-40 years, to reduce dependency on fossil fuels.

“Solar developers will always look to develop on poorer quality land where possible, but areas of the UK that include BMV land and have the right grid infrastructure to facilitate appropriate connections may need to be developed if government targets for solar generation are to be met,” he said.