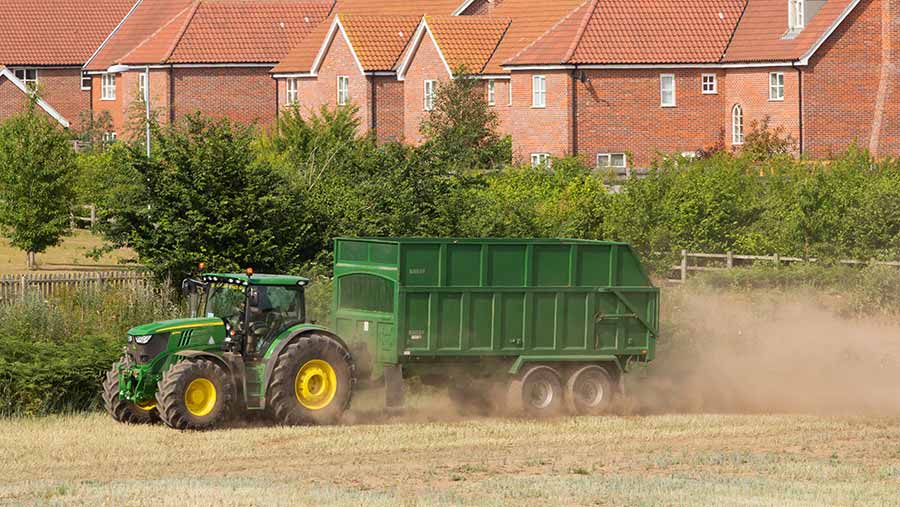 Agricultural buffers at the edge of the rural-urban fringe provide their own unique challenges, but they are also home to some of the country’s most successful farm businesses.

For many urban farms located in highly populated areas there can be a higher incidence of crime, including fly-tipping, joy-riding, illegal raves, arson attacks, vandalism, theft, trespass and incursions from travellers.

However, despite the challenges, many urban farmers say they would much rather be farming there than in remote locations where the public barely frequent.

According to the NFU, some 32,000 farms in England and Wales are operating on the urban fringe.

Defra has indicated that farm subsidies will eventually be phased out after Brexit. Therefore, how these farms take advantage of their locations to generate extra income from diversification will go a long way to determine if they make a success out of Brexit.

According to research by the Campaign to Protect Rural England (CPRE), around two-thirds of green belt – the area of open land around cities on which building is restricted – is farmed in England. That’s not much different to the country as a whole (71%).

Agriculture in the green belt is extremely varied, ranging from large-scale glasshouses to community farms, fruit and vegetable farms, and arable farming on some of the most fertile soils – 16.2% of land is on the top two grades for quality (1 and 2).

In addition, the green belt is home to many livestock farms, which produce everything from dairy, eggs and poultry to pork and beef.

Will Gemmill, head of farming at Strutt & Parker, based in Cambridge, says he would rather farm next to a busy town or city than in the middle of nowhere, and out of reach to the general public.

The key to a successful business in the urban fringe is to think about your captive audience and their needs, he explains.

Opportunities can range from supplying local produce to farm shops, or organic food box schemes to bigger farm diversifications such as storage facilities, specialist shops or outdoor pursuits such as assault courses and football pitches.

“There are lots of opportunities if you want to embrace the public and get them to visit your farm,” says Mr Gemmill.

“Firstly, I would recommend doing a bit of market research. Think about what you could do. It’s also about matching the resource to the dynamics of your area.

“For example, a farmer based in Buckinghamshire might have a different clientele to a farmer in Shropshire. Maybe a farm shop or café/restaurant might work in one area, but football pitches might be a howling failure in another.”

Passion the key to success

Mr Gemmill recommends farmers consider diversifications they are passionate about.

“Are you an introverted person? If so, then go low key with something like storage,” he says. “But if you like the general public, you may wish to consider opening a farm shop or a clay shooting day.”

The beauty of diversification is that it can give your business a buffer in the bad times, he adds.

“I think farming will do OK out of Brexit, but there will be good and bad years,” says Mr Gemmill.

“If farming isn’t doing so well, the non-farming aspect can help you out.”

Six tips for surviving on the urban fringe

1.    Think about your geographic location and your potential customers

2.    View your proximity to urban areas as an opportunity, not a threat

3.    Understand your audience and think about their requirements

4.    Work with the general public to avoid an “us versus them” mentality

5.    Engage with the public by hosting farm visits or events such as Open Farm Sunday

6.    Manage threats that do arise, such as rural crime, with a cool head

5.    Sports facility such as nine-hole golf course or driving range

Berkshire farmer Colin Rayner says sweating the assets of his farm and using the expertise of his staff are key ingredients for a profitable farm business in the urban fringe.

Mr Rayner, a director of J Rayner and Sons, farms 2,000 acres of land (500 acres owned) and rents from 19 different landlords in the East Berkshire area.

The Rayner family has farmed in the Colnbrook area since the start of the 17th century during the reign of Elizabeth I, so farming is in his blood.

He has spent large amounts of money trying to secure his farm, including electronic gates, CCTV, and concrete blocks in front of field gates.

Fly-tipping is one of the biggest issues. “As soon as they fly-tip in front of your gate, you own it. You’ve got to be very careful not to be prosecuted by the Environment Agency,” says Mr Rayner.

His staff cannot leave tractors or other farm machinery in fields. “If a machine breaks down, you have to stay with it, or all its windows will be smashed.”

Competition for land is intense – “there isn’t a field without a landlord wanting it for other purposes,” he says.

Despite these obstacles, he cites many advantages of farming in the urban fringe.

“Our farm wouldn’t exist if we were purely farming. We farm because we want to be farmers,” he says.

“If we didn’t have our buildings rented out to companies associated with Heathrow, our cottages rented out, have the snow-clearing contract at the airport, do our landscaping and help with the groundwork at the Royal Windsor Show and at various agricultural shows, we wouldn’t make a living, or employ the same number of people and maintain the fleet.” 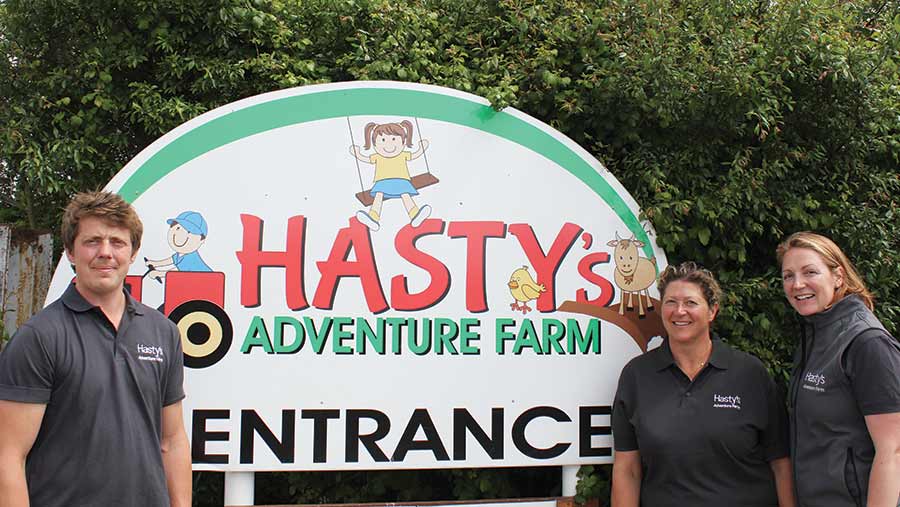 NFU deputy president Guy Smith runs a mixed and diversified family farm on the north East Essex coast near Clacton-on-Sea. There are 1,000 acres of crops and his brother and nephew milk a 200-cow herd.

The farm has encountered problems with rural crime; one field has been torched three times over the last decade and hare coursers have been prosecuted.

But Mr Smith views living “cheek by jowl” with the non-farming public as primarily an opportunity, rather than a threat.

The Smith family have thought carefully about the demands of the local population and diversified the farm business accordingly to include a golf course, shop, fishing lakes and an airstrip. nder the management of his sister, Penny, an open farm-style tourist attraction was opened in 2016.

“It’s these sorts of ventures where we try and take advantage of the urban opportunity,” he says. “I’d much rather farm in a busy area than one that’s totally remote like the middle of the Canadian prairies.”

Mr Smith says there are 100,000 people living along the coast from Harwich to Jaywick, especially many elderly or retired folk, and he is keen to link up the urban-rural divide.

A further 10 to 20 miles north lie the busy towns of Colchester and Ipswich, with an additional 300,000 residents.

Within five miles of the farm, there are around 8,000 static caravans, including 4,000 within two miles.

Hundreds of thousands of day visitors also come out of the big urban metropolis areas – for example, to visit Clacton Pier or its annual air show.

Hence he is now considering setting up a café-restaurant on the outskirts of Clacton to get people interested in local food and where he can sell direct. The project is currently in the planning process.

“We farm in an area of productive farmland, surrounded by densely populated towns,” he explains. “But it doesn’t have much of a food culture like the West Country. I think there’s a real opportunity here.” 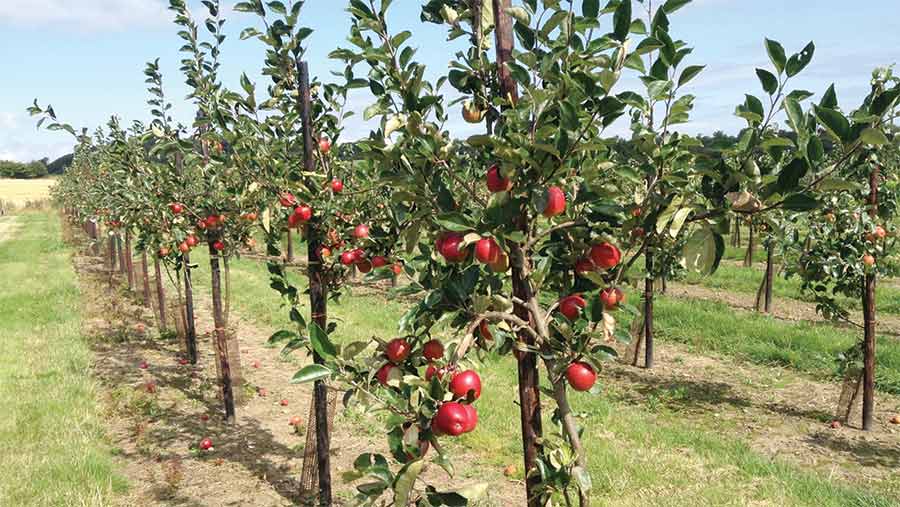 Craigie’s Farm pick your own apples

The Sinclairs have been farming on the outskirts of Edinburgh since the 1880s and having close contact with customers has always been central to their success.

Situated in South Queensferry, just six miles west of Edinburgh, the Sinclairs have always been aware of this huge market on their doorstep.

In the late 1980s, the family started growing soft fruit and opened a small farm shop, which soon became the place for locals to buy fresh fruit and vegetables.

Following the death of George Sinclair in 1995, son John and his wife Kirsteen have been keen to “grow the seed” planted by his efforts and energies.

A new farm shop and café were opened in 2007 and have since doubled in size with the addition of a buttery and an extended dining area.

The farm used to grow soft fruit to supply Sainsbury’s, but in 2010/11 the Sinclairs decided to sell directly to the public through the farm shop and pick your own (seasonal).

“We used to sell soft fruit to supply Sainsbury’s, but found that each year we were having to do more and more and getting less and less in return,” says Mr Sinclair.

The farm has a turnover of £2m and it attracts roughly 250,000 customers each year, with an average individual spend of £10.

Mr Sinclair says about 50% of the customer base is elderly or retired professionals with high disposable income. The other 50% is young families with children.

For 10 months of the year, the farm attracts most of its customers from a six-mile radius. But in July and August, people visit from as far away as 80 miles.

“If you want to buy a pumpkin for £1, then go to Lidl. But if you want to bring your family on farm to find out how food is grown, get the kids covered in mud and pay £6 for a pumpkin, then come to Craigie’s.”

The Sinclairs are also looking to grow the business into a farm park and they have submitted a planning application to build a new access road into the site.