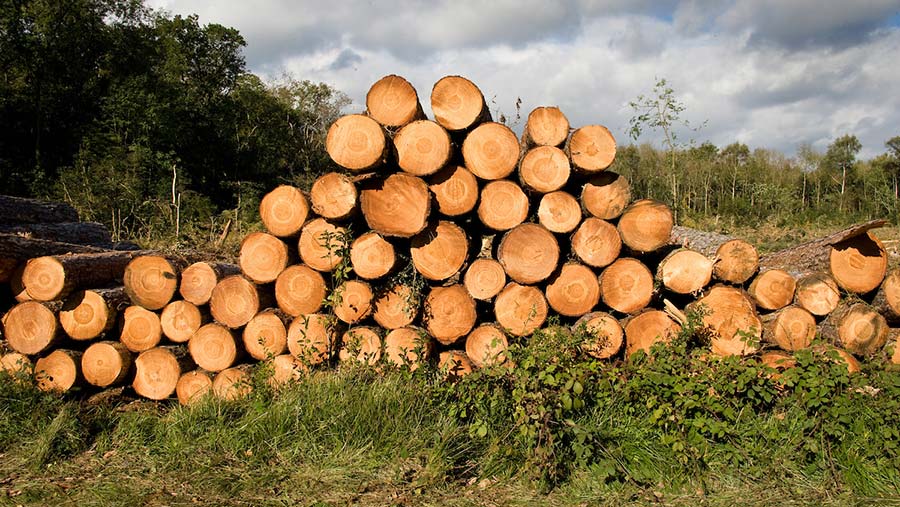 Landowners in England and Wales could generate an additional £20m in income each year by bringing unused woodland back into production, with timber and woodfuel prices currently at a 30-year high.

Better woodland management should also leave farmers well-placed to unlock future environmental payments, which the government has said will be tied to the delivery of public goods.

It is estimated that only 59% of woods in England and 57% in Wales are under active management, which experts say is a lost opportunity economically, environmentally and socially.

A report by the Royal Forestry Society (RFS) says that bringing all unused woodland back into production would be impracticable, but increasing levels of managed woodland to 75% is achievable.

“With it comes job and benefits to the local economy – there’s no downside.”

The report, Bringing woodland into management: The missed opportunities, says recent increases in woodfuel and timber prices have made it financially viable for more woods to be actively managed.

Property consultants Bidwells, in a separate report on the prices achieved for timber in the six months to December 2018, said that prices were no longer growing at the rapid pace of earlier in the year, but values were being maintained at their high levels.

They said that the weakness of sterling had played an important role in the price increases, but high global demand and tight supply suggested there was no reason to suspect a weakening of prices in the short term.

The RFS highlights that the south east and south west of England have a higher proportion of unmanaged woodland than the north east of England, which has maintained more of a tradition of active forestry management.

But one of the problems in the south of England is a severe shortage of forestry contractors, which means landowners can struggle to secure contractors particularly for small and complex operations.

A solution to this problem could be the establishment of collaborative groups which take on the management of small woodlands and the marketing of timber on behalf of individual landowners.

The report suggests further income from managed woodland could be generated from environmental payments for ecosystem services and by opening up land for public access.

Advice for farmers with unmanaged woodland

Who can give me advice?

The RFS recommends contacting a professional forestry agent to get the best advice on the farmers’ options for long-term woodland management as well as source contractors and market timber.

To find an agent, farmers can contact their local Forestry Commission office or search the Institute of Chartered Foresters database.

Will I need a felling licence?

Even a small unmanaged wood is likely to yield more than this in the first intervention.

How do you go about marketing wood or timber?

Woodland owners typically sell their timber standing either to the contractor, who fells the trees and transports and sells them to a processor (woodfuel merchant and/or saw mill), or direct to a processor.

Farmers are advised to make sure felled timber is picked up by a timber lorry as soon as possible as timber is normally sold on weight tickets.

What does it typically cost to extract timber?

The cost will depend on access to the wood, volume and species of timber and woodfuel, and whether the trees are harvested using chainsaws or a harvesting machine.

Prices for wood products are currently attractive so a first intervention in a previously unmanaged woodland should generate positive cashflow net of costs, including restocking where required.

Will i pay tax on the proceeds?

There is no income tax on timber sales, but VAT may apply.

The process should be led by the farmers’ long-term objectives for the woodland, not by grants.

Taking a long-term view will yield the best financial and environmental outcomes, including a commitment to management practices such as grey squirrel and deer control.

Landowners are recommended to develop a long-term management plan. Under Countryside Stewardship there is a £1,000 grant available for a Forestry Commission-compliant management plan.

This is a prerequisite for any further government grants.