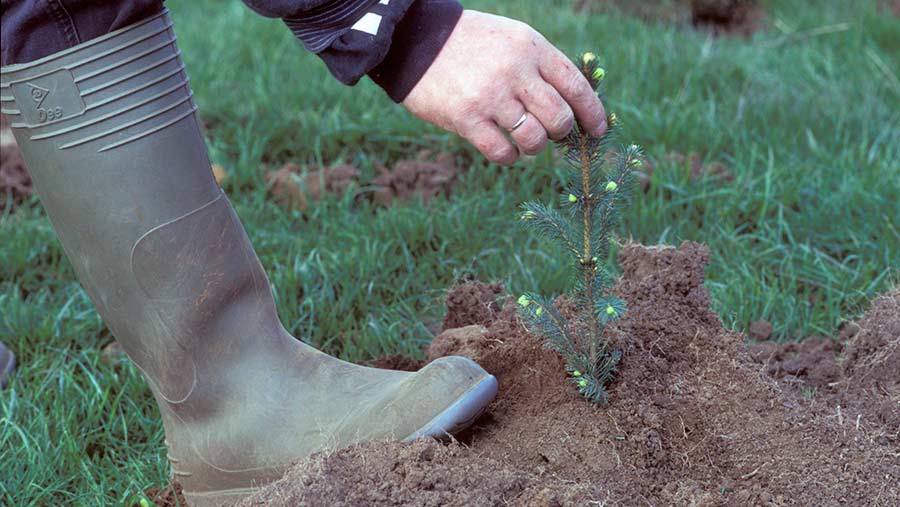 The best time to plant a tree was 20 years ago – the next best time is now, or so the proverb goes.

For farmers with marginal land and one eye on the future, now might be the time to examine the business case for tree planting.

While bureaucracy is being blamed for stunting tree progress in some parts of the UK, the political will and financial incentives to increase new plantings across is strengthening.

See also: 9 reasons to plant trees on your land

Woodland and forestry is catching the eye of landowners at a variety of scales, particularly as businesses are exploring alternative income streams.

Example cashflow for new planting of 100ha of conifers in target area, deer and rabbit fenced. This shows what the planting in Scotland would return to the landowner.

The “income” is purely funded by grants, no capital input required.

Scotland is leading the way in incentivising landowners to plant trees.

The Scottish government recently announced a planting target increase from 10,000ha a year to 15,000ha a year by 2025 – equating to an additional 11m trees taking root annually.

In line with the announcement, grant funding to stimulate action has been strengthened, topped up with region-specific incentives.

“Landowners in the Central Scotland Green Network can tap in to an extra £2,500/ha (up to 40ha) on top of any other forestry grant scheme,” he said.

“That could take the amount you receive to between £6,000 and £9,000/ha and you can continue to collect your BPS payment once the woodland is planted.”

Further north, some marginal hill farm units have made that decision.

“This month a farmer has asked me to start the process to get consent for a 300ha parcel.  We are in talks with another over 260ha and we have just been involved in a 364ha parcel.”

A report last year by the Scottish Agricultural College compared the financial returns from 20,000ha of established forests and sheep farming before subsidy. It found that forestry was three times more profitable.

Mr Kennedy said: “Farmers are looking at the economics of hill farming versus forestry and are seeing that they can plant large areas with zero inputs to create a long-term, tax-free capital growth sheltered by inheritance tax relief with a sought-after asset.”

A different approach in England/Wales

While land values make the commercial case for large-scale plantings in England more difficult, the incentives available for planting are comparable to Scotland.

The Conservative government has committed to planting 11m trees during its five-year term in power and recently announced a £19m Woodland Carbon Fund to stimulate commercial plantings.

The application window for tree-planting grants under Countryside Stewardship is closed, but has been offering farmers with areas exceeding three hectares £1.28/tree plus a premium if the trees are planted in a shelter belt.

John Clegg from woodland and forestry firm John Clegg & Co said a generational change in agriculture was encouraging some farmers to look at new ideas.

“The typical example is an upland farm where there may be no succession or somebody is looking at the future wanting to expand and diversify.

“Assuming you’re in the right areas – close to a mill with good access and no land use restrictions – that land could well go in to forestry.”

Mr Clegg said the plantable land doesn’t need to be huge to be commercial.

“If you’ve got a good site you can run a commercial thing on something quite small. With 4ha of quality conifers you can be very commercial.

“Generally you’re looking to go a bit larger because of all the machinery you need, so you get economies of scale.”

Long-term forecasts for demand for timber and wood products is good.

The UK has huge housebuilding targets to achieve which will increase the demand for home-grown timber.

Standing prices of hardwood for firewood range from £30/t to £40/t – double what it was 10 years ago, driven largely by the wood-burning stove market.

“I think the overall projection is that there is not enough timber to meet the demands of new production and also the biomass scheme is taking some of it out of the market,” says Savills director Marc Liebrecht.

“It’s all good market forces coming in to play and keeps the market buoyant.”

He added that where plantings in England and Wales are mainly small-scale, it is for biodiversity reasons or to create sporting potential.

“There are a lot of upland farms and a big demand for timber in Wales because of its infrastructure is but a lot of whether hill farmers consider forestry seriously will depend on where subsidies go.”

“Once established, the woodland can provide a useful belt of shelter to protect livestock. Equally, the trees can help to reduce soil run-off, effectively mitigating against erosion.

“Economically speaking, the prospect of home-grown wood fuel is always welcome. However, landowners should investigate other profit options.

“If the wood can be sold as solid fuel or, if a processing and drying facility can be established, as woodchip, an additional income flow can be carved out.”

There are, undoubtedly, issues with the bureaucratic nature of the application process in England and Wales.

Forestry experts say that this is the principle reason why only 700ha were planted in England and 100ha in Wales last year.

“We think 11m trees is pretty modest. It’s only 1,000ha of planting a year. There is funding within countryside stewardship for up to 2,500ha every year.

“There’s funding and ambition, but it’s not happening in practice.”

He added farmers are turned off by the cumbersome process of applying to Natural England and the Forestry Commission for the grants.

“The application process for a big scheme over 100ha could take two years or more,” he said.

See also: Free online learning Academy – How to plant trees on your farm

What grants are available?

The two primary sources of grant funding for planting are through Countryside Stewardship (CS) and the Woodland Carbon Fund.

New planting grants under CS are for areas exceeding three hectares. These are eligible for £1.28/tree plus £1.60/tree if they are part of a shelter.

An annual maintenance payment of £200/ha is paid for 10 years from planting. Additional funds are also paid for fencing and gates.

Applications must go through Natural England. The application window is closed but is expected to re-open in February 2018.

Alternatively, the Woodland Carbon Fund is targeted at commercial forestry and pays a similar amount per tree for plantings greater than 30ha with a minimum block size of 10ha.

There is no maintenance payment and the application window is fully open now, operated by the Forestry Commission.

Grant support applications fall in to one of nine woodland creation options and are fully open now through Scotland’s Forestry Grant Scheme.

There is an initial planting payment and an annual maintenance payment for five years. There are also a range of capital grants available for operations such as fencing and tree protection.

Planting conifers in a non-target area attracts a grant of nearly £3,000/ha which increases to £3,300/ha in target areas identified by the Scottish government.

Land owners in Central Scotland, Ayrshire and parts of Fife could be eligible for an additional initial payment of £2,500/ha on top of selected new woodland planting options.

Funding comes from the Glastir Woodland Creation scheme which will close at midnight on 1 May 2017. The next window is expected to open in 2018.

Payments range from £3,000 to £4,500/ha depending on the species and category of woodland being created. An annual maintenance payment of £60/ha is available for 12 years, and fencing grant rates are £3.48/metre.

All income from timber is tax free.