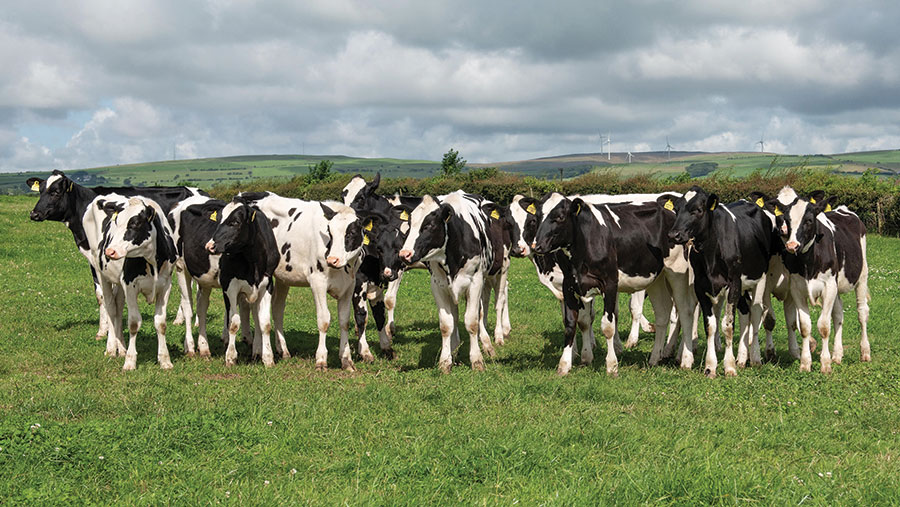 The next generation - Boltonmanor Holstein heifers

When Tom Stable and his wife Anna returned home to join his parents, Mike and Denise, at Bolton Manor dairy farm, near Ulverston, six years ago, they soon realised the only way to provide enough income for both couples was to expand.

In 2013, they added a second dairy unit, Edge Hill Farm, under a tenancy, taking the overall farmed area to about 200ha.

However, a year later, the milk price plummeted, incomes fell and the Stables were forced to look beyond milk production to generate sufficient revenue.

See also: How one dairy farm set up a processing unit to sell direct

After considering their options, the family decided ice cream production fitted well with the existing business.

The Stables also realised that, with the farms located close to the tourist honeypots of South Lakeland and Morecambe Bay, there was a sizeable market to target.

Mike and Denise initially invested £60,000 to convert the dairy at Edge Hill into a retail outlet, ice cream parlour and a small café with seating in the yard. A second-hand, 60-litre pasteuriser and batch freezer were added later. 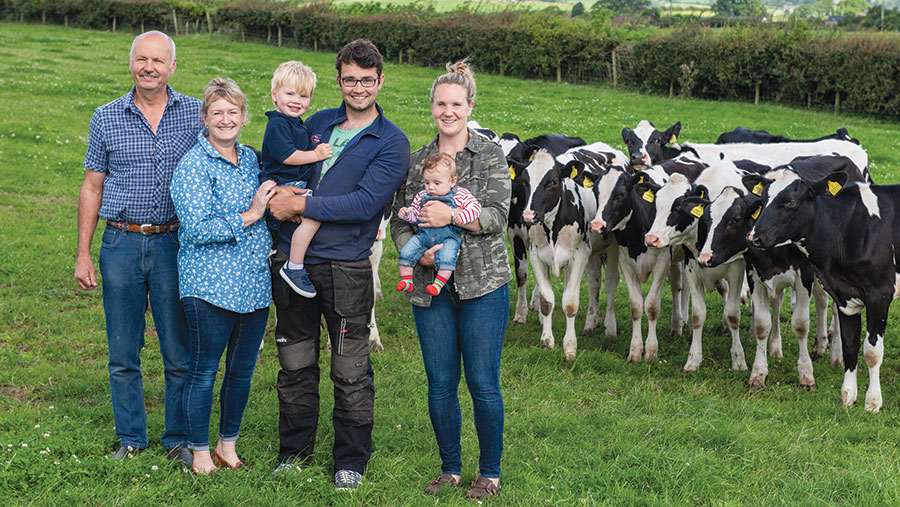 With the investments, training and fact-finding complete, Cumbrian Cow Ice Cream finally opened in May 2016. The venture has been promoted through Facebook and word of mouth, with additional footfall gained from visitors doing Google and TripAdvisor searches.

Marketing has been an overwhelming success, with the couple estimating they have 80,000 customers a year.

But it takes a lot of effort to meet that much demand. Even though the diversification employs 14 people, Denise makes all the ice cream herself, which means spending up to six hours a day in the kitchen.

“I don’t work in the shop now. I’ll have about 60 pans of fresh ice cream made at the start of each day,” she says.

“If it is a dull morning, business is slow. If the sun comes out, within half an hour, business can have doubled,” says Denise.

It means watching the weather carefully and ramping up production to ensure they have sufficient stocks if a sunny weekend is forecast.

“On a good day, the cabinet can be refilled several times and we will probably sell 200 litres of ice cream,” Denise reckons.

The ice cream adds a significant margin to the milk, despite the cost of other ingredients such as sugar and flavourings.

During the six months of the year when the ice cream parlour is open, milk is bought from the farm business.

“We had to inform the milk buyer that we were putting some of the milk into another market,” says Mike.

The ice cream business takes about 1% of Bolton Manor’s production, or about 10,000 litres of milk, so it does not affect the forecasts, he adds.

Mike tends to work across the two enterprises and he advises anyone taking on a diversification not to spread themselves too thinly.

“When we took on the tenancy at Edge Hill Farm, we didn’t appreciate how much more difficult it is to run two different sites, even though they are only two miles apart,” he says. 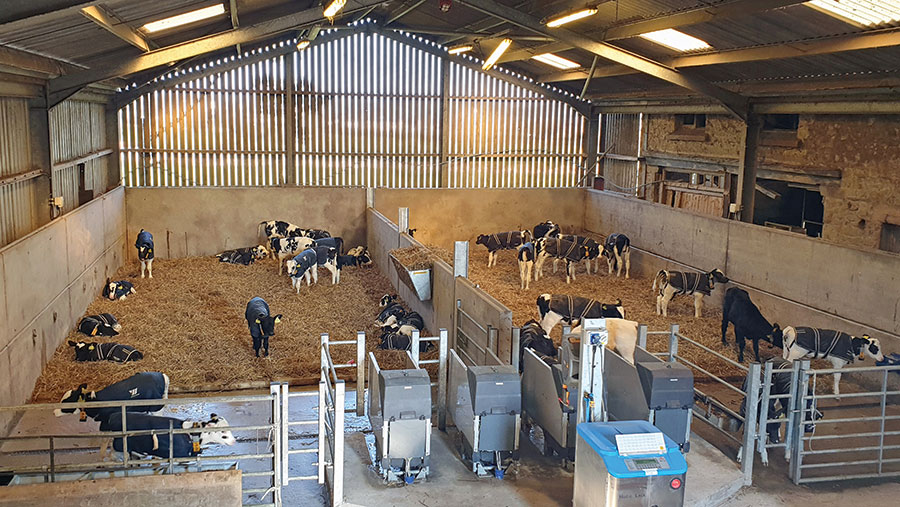 The herd is approaching 300 head, with 180 dairy youngstock and 70 store cattle.

“We’re still farmers first and foremost, and we have realised the core business has to be stable and successful before you diversify,” he advises.

“It’s exceptionally difficult to control two separate businesses, so you must have someone who concentrates on one business to do a good job of it,” Mike says.

That policy and belief is borne out by the continuing success of the dairy unit, which generates as much as 75% of the overall farm income through milk sold to Arla.

Mike has stepped back, acting as troubleshooter and co-ordinator for the businesses, and Tom and Anna have been able to focus on developing the pedigree Holstein herd while introducing better feeding and other management changes.

Cow numbers have been increased from 200 since the tenancy was taken on at Edge Hill to almost 300 head, plus 180 dairy youngstock and 70 store cattle.

Higher-yielding cows were switched to year-round housing in a new 126-place, sand-bedded cubicle shed last year, while the lower-yielders still remain at grass through the summer.

As well as increased cow comfort, the building has a robotic feed pusher and LED lighting. The LEDs minimise the cost of lighting the shed for 16 hours a day throughout the winter.

The changes have helped increase average yields across the herd from 9,000 to 10,400 litres a head. 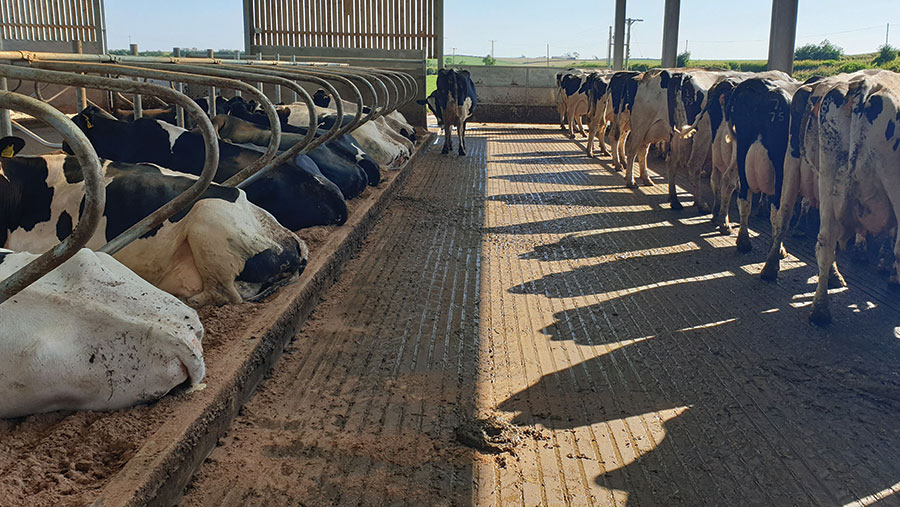 As well as cow comfort with the sand bedding and extra space for the milking cows which are housed year round, the building has a robotic feed pusher

The cows are fed to produce the best milk constituents possible, as that is what Arla wants, and the Stables also look for a constant fat content for the ice cream, says Mike.

Despite the northerly position of the farm, Tom has introduced maize, grown under plastic, to replace wholecrop and boost energy levels in the diet.

Three-quarters of the dairy cows’ diet is home-grown and fed as a complete diet, topped up to yield in the parlour.

Tom also attributes the increased yields to weekly instead of fortnightly vet visits, which have helped improve the pregnancy rate from 17% in 2017 to 25% this year.

“With both farms working well, we want to ensure we maintain our high standards while improving the efficiency of our production processes,” Mike says.

For the ice cream business, he wants to build on the positive message the venture has given to the public.

“People are fascinated by the farm and what we do. It is a good opportunity to educate them and tell our side of the story, so we’ll get some more animals on display and improve the farm experience,” Mike says.