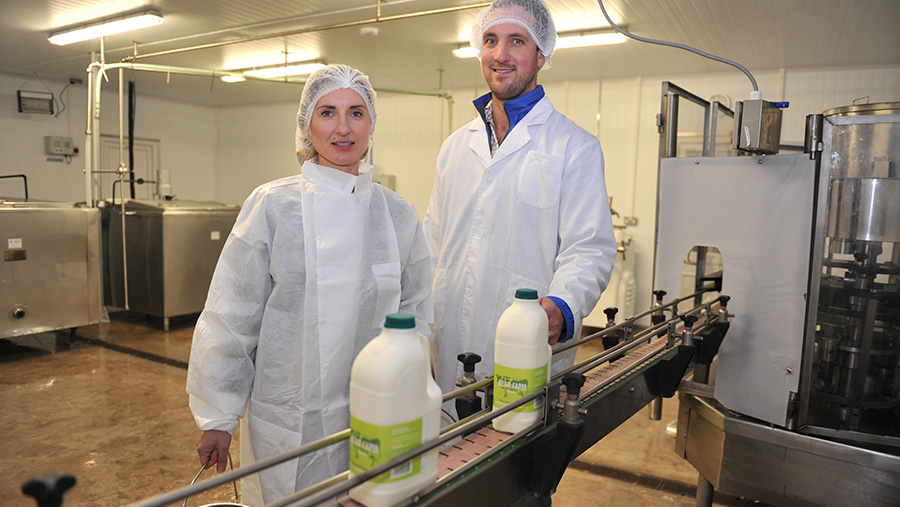 A dairy farming couple are using their expertise in food manufacturing to process their own milk from their Holstein Friesian herd and sell direct to customers.

Lawrence and Izabela Hembrow began milking cows on their Monmouthshire farm six years ago after having careers in the fresh produce sector.

Their family also has a farm in Somerset and acquired the 73-hectare (180-acre) Mead Farm near Magor as a second unit.

The Hembrows’ vision for the business extended beyond bulk milk sales to one processor.

Direct sales seemed to be the right fit for the farm and their knowledge of supply chains and retailing.

“We have a fantastic fresh product made on the farm every day and we wanted to build a business which would add value to it and make it accessible to local customers,’’ Mrs Hembrow explains.

“Selling directly to customers allows us to develop and build our own brand and have a direct relationship with the consumer.

“It also gives us more control on our farm and business, the costs and prices, and we are not dependent on one product and one customer.’’

Mead Farm Foods was launched last year and, despite being in its infancy, milk sales are averaging 500 litres a week. As well as this they are also selling 30kg butter and 20 litres cream a week.

However, they still supply Arla with 1.6m litres of milk per annum.

“Arla plays a key role in the success of the farm and will continue to do so. We are very keen to maintain this relationship and would look to continue supplying 1.6m litres a year.”

It cost around £240,000 to convert a former calf shed into a processing unit.

The Hembrows’ received a 40% grant through the Welsh government’s Food Business Investment Scheme to cover some of the capital expenditure.

The plant, which in addition to bottling milk has facilities for making yoghurt and ice cream, has the capacity to bottle 5,000 litres of milk a week.

Benefits of having expertise

A good understanding of the supply chain environment, within the fresh produce sector and its fast-changing condition, has been advantageous, says Mrs Hembrow.

“Our technical experience in food manufacturing is very useful because we understand the issues with food safety, which are very important in delivering a quality product.’’ 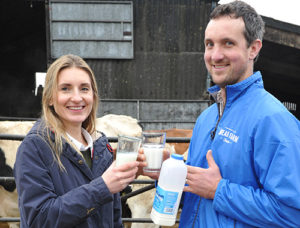 As is producing quality milk.

Grass is a key ingredient, with cows grazed from early spring until November.

“Grass really is the key ingredient in making this farm a success. We test the soils every year to help us correct pH and other trace element shortages,” says Mrs Hembrow.

A network of cow tracks topped with woodchip have been created to provide access to 2-acre paddocks, which are grazed in a 20-day rotation.

Some 20ha (50 acres) was reseeded when the Hembrows first took on the farm and the aim is to reseed up to 8ha (20 acres) a year with five-year tetraploid grass varieties.

Three crops of silage are cut, sometimes four, with the first cut taken in early May. Six hundred tonnes of maize is also sourced from a local farm and clamped on top of the silage.

Once housed, cows are fed maize and grass silages and 5kg of an 18% blend.

They also receive up to 4kg of an 18% concentrate in the parlour.

“We keep the system simple. We don’t rear youngstock, we don’t grow crops, we just grow grass,’’ says Mr Hembrow, who adds that they operate a flying herd with cows served to a British Blue and calves are sold at three weeks old.

In line with Mr Hembrow’s approach of keeping the system simple, the only machinery on the farm is a telehandler for feeding, tractor for scraping, a fertiliser spinner and a mower, with a contractor used for other farm work.

The farm and the milk processing enterprise are run as separate businesses.

Bottled milk sales are growing steadily as interest in the brand gains momentum – up 100 litres since December.

The Hembrows are concentrating on a local customer base with leaflet drops, social media, an open day and advertising in local magazines.

“It’s about educating people on what’s different about our milk. It would be a good exercise for every dairy farmer to try selling their milk to the public,’’ Mr Hembrow suggests.

“People don’t understand what fresh is, the difference between pasteurised and unpasteurised, whole and skimmed. It is all healthy and it is all low-fat.’’

The milk, which has a shelf life of five days, is pasteurised on the day it is produced and delivered the following day.

At 60%, semi-skimmed milk accounts for the bulk of sales, followed by full-fat and a very small volume of skimmed.

“People buy milk from the farm because it tastes different, it is fresher than what they buy in a supermarket,’’ says Mrs Hembrow.

Doorstep deliveries, which include locally produced bacon, eggs and black pudding, are made to local customers in an electric van powered by solar energy produced by 24kW panels at the farm.

There are also sales from the farm on a Tuesday and Saturday and the Hembrows supply several businesses including local coffee shops, restaurants and a bakery.

The Hembrows are confident they will achieve their target production of 5,000 litres weekly in the longer term.

To help them achieve this the next step will be to produce Mead Farm Foods ice cream and yoghurt, to add a new dimension to the business.

“We have an exciting 12 months ahead of us, we are so passionate about our relationship with food and the countryside, we just want to make it more accessible to others, too,’’ says Mrs Hembrow.