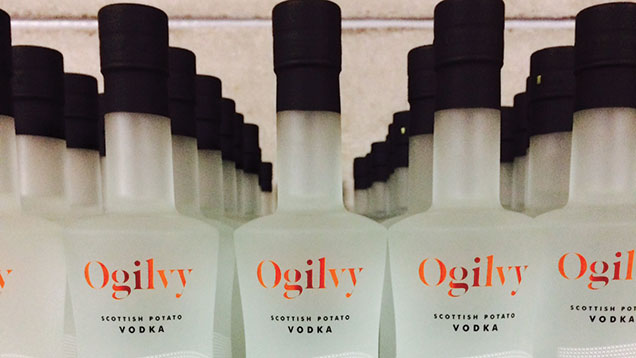 The muddy Maris Pipers that rumble up potato harvesters on Newton of Ogilvy farm look much the same as any others.

But instead of being transformed into chips, roast tatties or a topping of mash, their fate is to be served in chilled glasses, sipped by connoisseurs in city bars, and admired for their “flavours of toffee, green pasture, charcoal and hints of citrus”.

Making vodka from potatoes is nothing new: the Russians have done it for centuries and 5% of all vodka starts with spuds. But it is certainly a novelty in upland Angus, where the Jarron family has specialised in beef cattle, ware potatoes and cereals for four generations.

The farm has been steadily developed and expanded over the decades, but the possibility of building a distillery beside the cattle steading hadn’t occurred to anyone until Graeme Jarron decided the time had come to make his mark on the business. Three years ago he wasn’t even a vodka drinker and today he’s producing gallons of the stuff every day.

“I was disillusioned by the prices we were getting for potatoes from the supermarkets and started to look at producing some of the end products ourselves. Our first thought was to make crisps, but when we looked down the shop aisles at what the competition would be, we could see there were a lot of excellent products on the market already. So we realised it had to be something different,” he said.

“We already had good traceability in place on the farm for the supermarkets and I wanted to use that assurance and carry it through, to do everything ourselves, without any outsourcing. It had to be something where we had complete control. And to make vodka, we have all the ingredients on our doorstep: the water comes from the Ogilvy Burn and the potatoes from fields that are as little as 200m from the plant.”

Further investigation showed that the distillery could be powered by 30kW of solar panels on the adjacent grain store roof. And the cattle could benefit, too, as spent wash from the distilling process could be used as feed, so it meant the project could be classed as zero-waste. After a detailed feasibility study and a business plan devised by SAC, the whole idea began to look extremely attractive.

It is, however, a radical departure from the standard demands of day-to-day Scottish agriculture to rapidly research, fund and build a £300,000 distillery on the farm and then to take the raw Maris Pipers through the washing, mincing, cooking, fermenting, distilling and bottling stages to produce a quality “sipping” vodka.

That’s where Abhishek Banik came in. Abhi from Calcutta was a PhD distiller at Heriot-Watt University in Edinburgh and was initially involved in early trials to identify the alcohol yield potential and flavours of different breeds. But he and Graeme built up a strong working relationship and he left academia to join the team on Hatton of Ogilvy, where he refined the winning potato vodka recipe.

“We’re blending my farming knowledge with the modern science Abhi brings to the business,” Graeme explained. “And my wife Caroline, whose background is in design, has played a huge role in developing the brand identity.”

So what’s involved in producing vodka from raw tubers that are delivered in trailers straight from the field?

First, the potatoes are washed and with the skins left on, they are minced and cooked in huge pressure cookers in batches of 500-600kg to form a giant brew of potato “soup”. Enzymes are added to help convert the starch into simple sugars which the yeast converts to alcohol, and then the mix goes into fermenters for five days. Finally, after it makes its way through “Spud the Still” the liquid is 96% ABV.  It is then watered down to 40% and bottled.

According to Graeme, Maris Pipers are the tatties that produce the best tipple.

“They produce the best flavour and have a high dry matter which produces higher starch and sugar levels. That’s what we want for the distilling business,” he said. “We’ve broken the mould by deciding to leave the skins on rather than peel them and we’re using a secret yeast that’s never before been used to make vodka. What we have here is a humble small batch distillery. It’s our unique selling point. ”

The distillery only got under way in December, but already it is producing 2,000-2,400 bottles of spirit a month and using around 10% of the potatoes produced on the farm. The Jarrons target was “sipping” vodka that would be consumed in much the same way as whisky.

“We were looking to produce a mellow, smooth spirit with what’s described as ‘mouth feel’, not the harshness of mass-produced vodka that has to be masked with coke, lemonade, Irn Bru or other sweet flavours,” said Graeme. “We wanted to retain the key flavours.”

Bottles of Ogilvy vodka sell at £34.99 and around 200 a week are being snapped up by outlets in Edinburgh, Dundee, Glasgow, Forfar and Aberdeen. And while demand has already mushroomed after the company’s “soft” launch in December, Graeme is choosing his outlets carefully.

“We’re conscious of where we want to see the product sold. We’re not aiming for it to be stocked by supermarkets, as it’s a prestige product. We’re not seeing huge profit margins yet as we’re not selling enough, but the key thing is that we are no longer dealing with a perishable product. It can be marketed 365 days a year and if it doesn’t sell this week, it’ll still be good in two years’ time.”

And that’s what really sets the diversification apart from the output on the rest of the farm. Graeme says one of the most frustrating issues for a potato producer is seeing the product he has nurtured over a whole season be worth very little when it comes round to harvesting time.

He said: “It’s soul-destroying when you only get tuppence for your tatties after all the work that goes into producing them, and potato prices at the moment make me want to drive the vodka business even harder.”

But while the Jarrons are happy with the quality of their new farm spirit, they’re well aware of the competition for shelf space in upmarket vodka bars. And Graeme concedes that marketing is a hard sell. A promotional trip to London is on the cards and he’s far from blasé.

“There’s a lot of good produce out there so the competition is strong. We’re aiming for the top with retailers and high-end restaurants and we have to justify why the product is good. It has to sell on its merit.

“But the exciting thing is that we’d never consider taking a bag of tatties to sell at top outlets in London. This has given us an identity.”

In the meantime, the emphasis at Hatton of Ogilvy is on ensuring that the new distillery dovetails with the established farming enterprise. But surely a brand new business puts strains on the conventional system?

“If there is conflict, it is about a time issue,” Graeme explained. “We have a tractor man, but I am also full on in the fields at key points in the year. I can be ploughing all day until 8pm, then come in and do another shift, bottling in the distillery. But in many ways it’s not too different from working long hours at harvest.”

However, having a distillery on the doorstep required a steep learning curve when it came to paperwork. The stringent demands of Her Majesty’s Revenue and Customs (HMRC) include rigorous record keeping, so the family had to get rapidly up to speed with new skills and expertise. The Bond is on the farm right next door to the distillery and every drop of alcohol has to be accounted for, although the vodka is kept in “duty suspension”, which means no duty is paid until the bottles leave the farm.

Graeme said the process of obtaining a licence was surprisingly straightforward. “Everyone thought the legislation would be incredibly complex, but we put the wheels in motion and then just followed the timescale. You can’t be careless in the way you produce alcohol; there are strict procedures to follow and we know we can be inspected at any time.”

As to where does the project goes from here, the Jarrons have already been asked to consider developing additional ranges of vodka by adding new flavours from the neighbouring countryside. Raspberries, strawberries and blueberries are harvested only fields away and the region has a reputation for producing some of the world’s best soft fruit. But for the moment the family is hesitating.

“We are 100% set on producing a product that is noted for its identity, so rather than spread ourselves across several ranges we first want to make a name for Ogilvy vodka. Added flavours are something we might consider in the future.”

But what does his father, Eric, think of the farm’s new-found fame as Scotland’s first vodka distillery?

“He was reserved at first but he has embraced the idea and is now getting a taste for vodka. His tipple has always been brandy, but we’ve almost converted him.”

Graeme has also discovered that his circle of friends has grown markedly since he built a distillery on the farm.

“I think the whole community was in disbelief when they heard what I was planning. I’m trying hard to prove them wrong.”