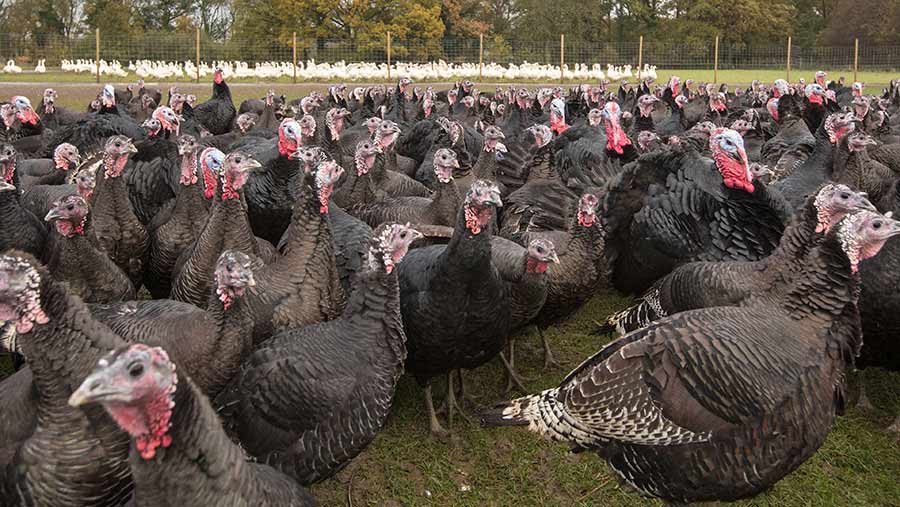 Farmers looking for a diversification with low start-up costs and good margins should consider if there is an opening for another direct-selling turkey producer in their area as consumers are willing to spend more on high-quality produce at Christmas.

That is the message from Philip Regan, chairman of the Traditional Farmfresh Turkey Association, which runs the free-range Golden Turkey quality assurance scheme for its 45 farmer members.

While the vast majority of supermarket turkey is produced indoors at scale in a similar way to chicken, they, and more than 200 others listed on the NFU farm turkey finder website, are tapping into a strong appetite for local food.

Mr Regan, who also is sales manager for turkey breeding firm Kelly Turkeys, says that an increasing number of consumers are learning there is a significant difference in quality between different birds and many are prepared to spend more to get the best.

Around 10m turkeys are sold annually for the Christmas table, from an annual total of 14.3m turkeys slaughtered in 2017.

Despite this being a decline of 50% in the past 20 years, with 33.6m birds killed in 1998, research by market analysts Kantar Worldpanel show that the volume of fresh turkey sales increased by 4.9% in 2017, with more whole birds and crowns sold than the previous year.

Getting established in turkey production can be regarded as one of the lower-cost diversification options open to farmers with a minimal amount of equipment required to get started.

Day-old birds will need to be kept under “brooder” heat lamps at a constant temperature of 37C during the early stage of their life and will be able to go outside from eight weeks old.

Thereafter a traditional barn with run-out into a field will be suitable, with no more equipment needed than appropriate feeders, drinkers and some distractions to create an “enriched” environment to minimise them pecking each other.

This can include items such as uncut bales of straw to peck, pallets to climb on and having CDs dangling on strings as a distraction. De-beaking is also an option.

All producers in the Golden Turkey scheme raise Kelly Bronze turkeys, which are slaughtered at 23-24 weeks rather than when they come to a target weight to ensure they have put down enough fat supplies for flavour.

To avoid having birds of too uniform a size to satisfy the demands of different consumers, different strains from within the breed can be purchased that finish at a variety of different weights.

White turkeys, which are still the mass-market breed of choice, are reared for a significantly shorter period of time – about 17 weeks.

When operating at a small scale, the only essential equipment is for stunning the birds to kill them ahead of bleeding (which also requires a ‘Welfare at Time of Killing’ certificate), and an appropriate work area to carry it out.

Evisceration (removing the guts) and feather plucking can be done by hand, although there are a selection of machines available for speeding the job up at scale.

Chilling facilities will then be needed to hang the birds (for seven to 14 days) prior to preparing them for the table, and thereafter until collection by the customer or delivery.

Marketing your output is, according to Mr Regan, the hardest part and requires personality, passion and pride, so research on what the opportunities are in your area, along with who will be responsible for being the “public face” of the business, should be considered before starting out.

If any handling of cooked meat is being contemplated, such as part of a promotional campaign then a hygiene licence will also be required from your local authority.

Insurance and other considerations

As with all diversifications, farmers should notify their insurance provider to ensure their flock is covered up to the maximum value in the event of fire or theft.

Producers should be aware that birds become highly valuable commodities in the run-up to Christmas and steps should be taken to keep them safe from thieves before and after slaughter.

Specialist avian flu insurance is also available via some rural insurers, which may be of particular interest to producers in the east of the country, where the threat is highest from it blowing in from the Continent.

Where to go for more information