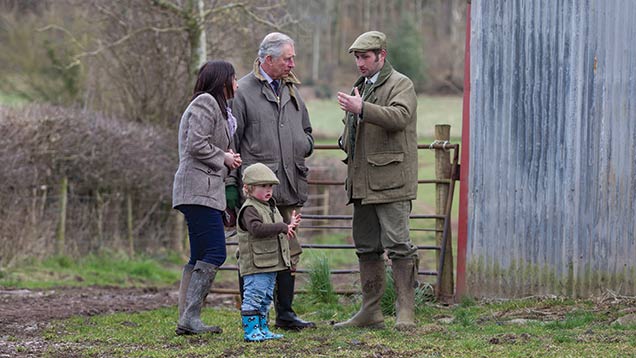 Sam and Emily Stables, new tenants at Kings Pitt Farm, Herefordshire, explain their plans to the Duke of Cornwall.

As the Tenant Farmers Association calls for a minimum 10-year FBT term, Alastair Martin, secretary of the Duchy of Cornwall, outlines the Duchy’s approach.

The long tradition of letting land in Britain has resulted in the most sophisticated agricultural landlord/tenant system in the world.

In 1900 most British farmland was farmed by tenants but by the time the Agricultural Tenancies Act invented the Farm Business Tenancy (FBT) in 1995, less than one-third was tenanted.

The freedom of contract allowed by FBTs brought a steady increase in land for the tenanted sector but some 10 years ago equilibrium was reached and the amount of let land has since been static.

See also: Farm tenancy – it’s about both sides getting what they want

When FBTs were introduced, landlords were resistant to granting longer term arrangements.

It was a quirk of the market that rents for bare land were often higher than those for equipped farms, adding to the temptation to grant short-term tenancies.

As the new regime bedded in, longer term lettings were more readily accepted but even now the average length of an FBT is three years and the average for holdings with a house and buildings is eight years.

This is regrettable – although a short-term regime suits the larger farms which can afford high rents for extra bare land, it is unhelpful to those starting out or progressing from a small to a medium-sized unit.

Viable rural communities need a diversity of farms and the larger estates have a role in providing starter and progression units to preserve and sustain communities.

The Duchy of Cornwall has more than 130,000 acres with more than 500 farm tenancies.

Of its 200-plus equipped holdings, the largest is about 1,900 acres on Dartmoor and the smallest less than an acre on the Isles of Scilly.

We have more FBTs than traditional Agricultural Holdings Act tenancies, with an average bare land FBT of more than 10 years and the average FBT term for a holding with land, buildings and a house longer than 20 years.

We strive to let starter or progression units where we can but because the number of new lettings is so small these only amount to about one a year.

However it is important that we, and other large estates, continue to take this approach in order to provide vital opportunities.

We recently let a 203-acre farm in Herefordshire on a 15-year FBT to Sam and Emily Stables.

They will keep 700 sheep and some cattle and pigs. They have moved from a 21-acre small holding with a temporary dwelling where they relied on bought-in grass keep.