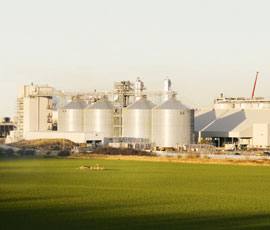 Europe’s largest wheat-based bioethanol plant is to restart production later this month after a 15-month shutdown, providing a timely boost to the domestic grain market.

The £300m Ensus plant at Wilton, Teesside, closed last May after just a few months’ commercial operation, blaming poor market conditions and a regulatory loophole that allowed cheaper imports of subsidised US ethanol into Europe. Bosses said the EU’s recent closure of that loophole was a major factor in being able to restart the plant and they expected it to be up to full operation within two months.

“Everyone is absolutely delighted that things are moving in the right direction once again and we are in a position to restart,” chief executive officer Peter Sopp said.

“It’s great news for arable and dairy farmers near the plant.”
Guy Gagen

Ensus has capacity to refine 1.1m tonnes of locally grown feed wheat a year, supplied through Glencore. It will produce more than 400m litres of bioethanol, plus 350,000t of high-protein animal feed (distillers’ dried grains and solubles) and 300,000t of carbon dioxide for use in soft drinks and food production.

“It’s great news for arable and dairy farmers near the plant,” the NFU’s Guy Gagen said. “It will also displace some exports, so is a much more efficient way of doing things as we won’t have the cost of putting that wheat on to a ship. We should see some sort of premium in those areas supplying the plant, namely Yorkshire and possibly into Lincolnshire.”

The announcement coincided with news that the Red Tractor crops and sugar beet assurance scheme had gained official approval from the EU as a recognised biofuels sustainability standard across all 27 member states.

It ensures crops with Red Tractor assurance can access all European markets without the need for additional audits or paperwork and will prevent the need for multiple schemes for different markets, Mr Gagen said. Farmers must ensure they are participating in the Renewable Energy Directive, part of the Red


Tractor scheme, and had not opted out, he advised.

Meanwhile, commercial production has been delayed at the UK’s second major bioethanol plant run by Vivergo Fuels near Hull. It was due to begin in mid-to-late summer, but has been put back to the final quarter of the year as commissioning continues.