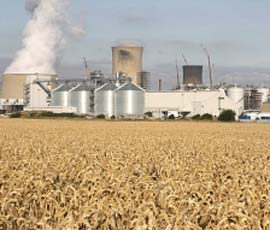 The Ensus bioethanol plant on Teesside is unlikely to reopen until next spring, according to latest reports.

The plant closed temporarily in May for four months to allow market and regulatory conditions to improve, but it now appears that the closure could last for nearer 10 months.

A report by the HGCA said the assumed re-start date for the plant had been pushed back to February/ March 2012.

Some progress had been made towards resolving the issues that led to the original closure, but progress remained slow, a statement by Ensus said. In particular, it blamed slow implementation of the Renewable Energy Directive, delays to the approval of voluntary sustainability schemes and a legislative loophole that had allowed imports of cheaper US ethanol into Europe.

“The recent action taken by the EU to address the tariff loophole is positive and it is anticipated that this will benefit the industry from its introduction some time in Q1 2012,” a statement said.

“Ensus remains confident in the future of the business longer term, but is frustrated by the slow development of the market given that it manufactures a highly sustainable product and its bioethanol and protein for animal feed make a major contribution to reducing greenhouse gas emissions and increasing the UK’s energy and food security.”

DEFRA’s estimated human and industrial wheat usage for 2011/12 had been revised down to 6.91mt, 4% less than last season, due to the delays re-opening Ensus.

The plant is one of the largest cereal grain biorefineries in the world, with capacity to produce over 400m litres of bioethanol a year from over one million tonnes of feed wheat.

But the HGCA report said the reduction in bioethanol usage would be offset by increased usage by distillers and animal feed compounders. Wheat usage as animal feed was forecast at 6.45mt, 5% up on last season but 193,000t down on earlier estimates.

Total wheat availability was 61,000t lower than 2010/11 at 17.85mt, as lower opening stocks and estimated imports offset a larger crop of 15.36mt, it added. “Imports are expected lower than last season due to the increased availability and good quality of the UK crop.”