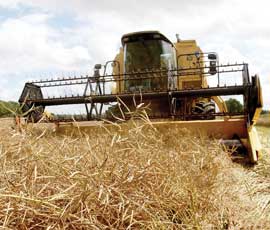 The outcome of a crucial vote on biofuels policy has been delayed by the European Parliament.

MEPs were set to decide this week (Wed 11 September) how much first generation biofuels – those from sugar, cereals and rapeseed – can contribute to the EU’s target of producing 10% transport fuel from renewables sources by 2020.

The EU environment committee was calling for a 5.5% cap on their contribution to transport fuel targets, while the trade committee wanted a 6.5% cap. MEPs voted on a 6% cap but the policy will have to go through a second reading in the European Parliament after it was defeated by a single vote.

The European Parliament will also decide whether or not to impose mandatory reporting of indirect land use change (ILUC) factors into the accounting of greenhouse gas emissions for biofuels under the Fuel Quality and Renewable Energy Directives.

NFU combinable crops adviser James Mills said a delay to the vote was good news for industry as the delay showed the level of dissatisfaction among MEPs with regards to the policy.

The biofuels proposals could result in the loss of a key market for UK oilseed rape.

At present 40% of the UK oilseed rape crop is exported to Europe for biofuels production, while UK bioethanol production provides a home for 2.2m tonnes of wheat, as well as providing protein feed to the livestock sector.