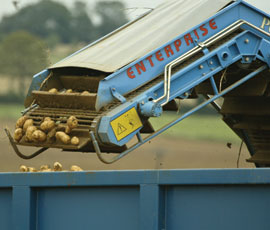 Potato harvest is under way across Europe, with many yields affected by dry weather, according to the latest Euro report by the Potato Council.

“GB yields have been extremely variable, particularly in early crops,” it said. “Some of the later planted crops have exceeded expectations, with some achieving a high baker content.” Crop health was generally good, with clean samples and only occasional skin blemishes.

In Belgium, August rain came too late for some early crops, and secondary growth had been found in a few places. Bintje yields appeared to be better than the same time last year but were around 5t/ha below the five-year average, it added.

Crops in France were also extremely variable, but the French Ministry of Agriculture estimated total production would increase by 11% on last year, to 5m tonnes.

“In the Netherlands, trial digs have shown an average yield of 39t/ha, compared to 46t/ha last year and 19% lower than the five year average.” Yields in Germany ranged from average to low, with the early harvest complete and maincrop harvest now under way.

According to HMRC, the UK imported almost 215,000t of potatoes in June – 44% more than last year, as fresh imports supplemented the poor 2012 crop.