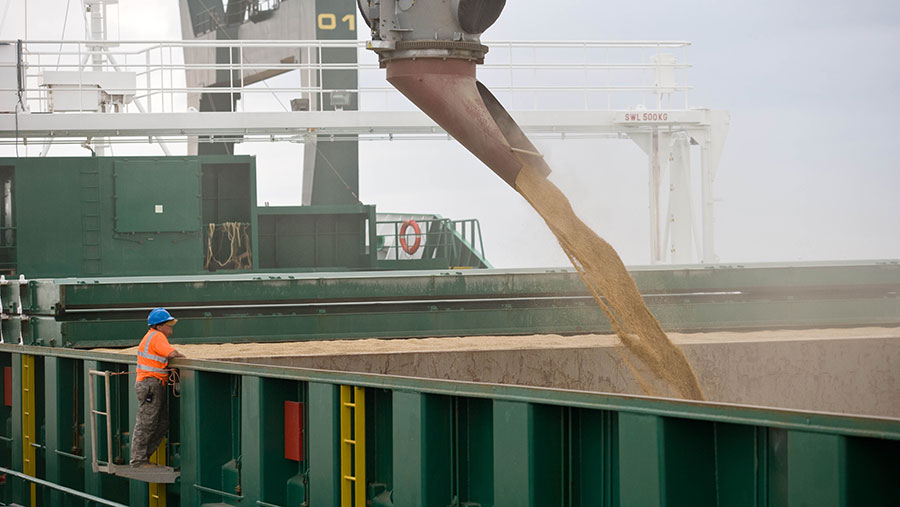 EU wheat exports have slumped to their slowest rate since 2011 creating a surplus of stocks that could put a ceiling on rising UK prices, according to AHDB analysts.

The slowdown in exports from the EU on to world markets is due to the strength of the euro and greater availability of stocks in Black Sea countries.

The euro hit its highest point against the US dollar for more than three years on 2 February at €1:$1.2492 making EU wheat less competitive on world markets.

“In the latest Egyptian wheat tenders, Russian wheat dominated. The cheapest offer from Russia at $192.45/t was $15.55/t under the French offer,” Mr Webster added.

The combination means just 2.6m tonnes of soft wheat has been exported from Europe since mid-December 2017, the lowest amount since 2011-12.

The total export for the season so far is also well down. Up until 28 January 12.2m tonnes had been exported, 2.8m tonnes lower year on year and the lowest volume for five seasons.

The lack of export means there is more available for home markets.

And, with global grain availability high, wheat prices have fallen. Imported EU feed wheat (East Coast quotes) has seen a fall, down £3/t from 11 September to the start of February.

But that contrasts strongly with the UK situation which has been experiencing flat or rising UK delivered prices.

Likewise, Yorkshire delivered prices had also climbed, up £5.50/t from mid-September to the end of January, Mr Collier said.

That was due to the limited availability in the UK caused by a poor harvest and high demand for compound feed.

Mr Collier said the UK surplus available for either export or free stock at 1.1m tonnes was down by 35% on year earlier figures.

This has pushed up prices to date, but the falling price of imports and high supply meant buyers were looking to source wheat from abroad.

At dockside there is only a £2-£3/t difference between home-grown wheat in imports and, although it should not push prices down, it will create a ceiling that could slow further upward movement, Mr Collier suggested.