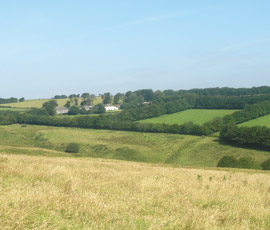 Billed as the largest south-west farm to come to the market this year, Horsen Farm at Simonsbath, Exmoor, is for sale for the first time in many decades.

The west Somerset holding is described by Peter Huntley of Exmoor Country Properties as a typical Exmoor hill farm and comes to the market on its owner’s retirement.

Horsen Farm has been well managed and is known for its cattle and sheep output. The holding’s 1,280 acres are split between 700 acres of productive improved land and 580 acres of rough grazing and moorland, which can carry 200 suckler cows and a 1,000-ewe flock of sheep.

The farm sits in a ring fence and has a traditional five-bedroom farmhouse, with a combination of natural, spring and borehole water across the land. There are extensive modern and traditional buildings, including a seven-bay Atcost silage barn/fodder store with lean-tos for cattle, calf housing and cattle handling facilities.

There is further cattle and sheep housing including another seven-bay barn and a large steel portal frame building built in 2002.

The traditional buildings include a courtyard of stone buildings, stables, a workshop and storage buildings. There is also a pair of more modern cottages needing refurbishment.

In a private setting, the farm is currently in an Environmentally Sensitive Area scheme until spring 2014 and work has been prepared for a Higher Level Stewardship Agreement application. SFP entitlements are included in the sale.