All three finalists have been thoroughly tested and have demonstrated their ability to manage change in a large business.

A common strength was the plan each had to put their business in a strong position through the next few uncertain years. 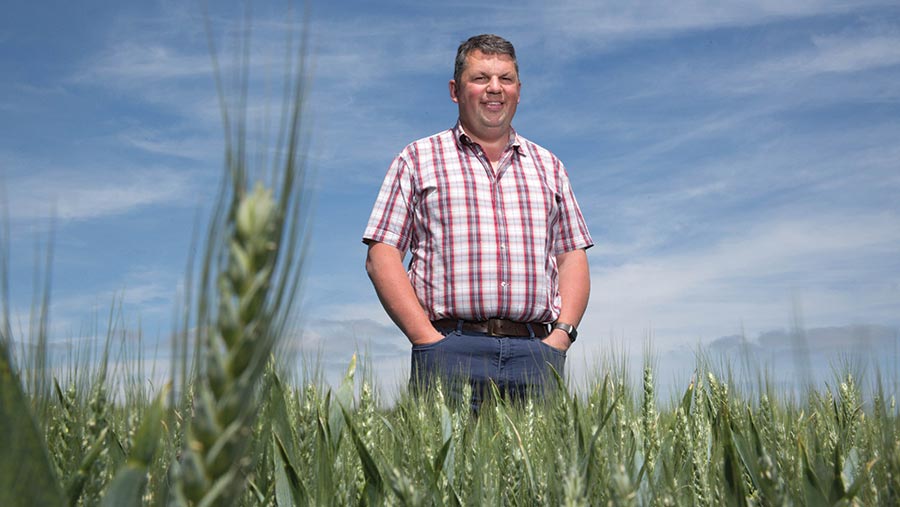 In 10 years Andrew has increased profitability and reduced risk, so that the farm he manages can invest and become sustainable for the next generation.

He has diversified cropping and income, embracing renewable energy and Countryside Stewardship alongside a switch to no-till drilling, which has slashed establishment costs.

Passionate about educating the public about farming, he fulfilled this mission almost too successfully in 2015 when 1,600 people attended his Open Farm Sunday event – about 800 had been expected.

In cropping terms the biggest change in recent years has been to adopt the conservation agriculture approach, with the first move made after the terrible harvest of 2012 with the introduction of strip-till drilling.

Two years later the next big step was a cross-slot drill to fully embrace conservation agriculture, aiming for low soil disturbance, diverse cropping and to keep a living root in the soil as much as possible.

Most crops are grown on contract or with a premium agreed prior to sowing. He likes to start harvest about 50-60% sold.

Budgeting and benchmarking against other heavy clay farms is carried out with a farm business consultant to get a good focus on business costs and margins. Machines are costed individually so running costs can quickly be assessed.

The move to no-till means crops are established for about £60/ha including rolling and occasional mole draining, compared with £135/ha for the conventional approach.

Most of the farm work is carried out by Andrew and one full-time employee, with regular seasonal help. Overheads have been trimmed by Andrew taking on work that the farm’s land agent would traditionally have done – for example, negotiating lease terms for a 32MW solar park.

An annual health and safety review is run by a consultant, with staff encouraged to take the lead.

Andrew is responsible for farm strategy and investment and meets informally once a week with the estate’s owner, with quarterly management meetings held to report on performance against budget.

The farm entered ELS in 2011, followed by a Countryside Stewardship agreement in 2017, with 10% of the land now in environmental options. “This, coupled with our cover crops and zero till, is providing a great environment for wildlife,” says Andrew.

A further step towards full conservation agriculture brought sheep back into the arable rotation last autumn, with a local grazier bringing his flock to cover crops.

Andrew is improving the management of 80ha of traditional woodland, securing a grant for a forwarding trailer to supply timber for chipping to fuel a biomass boiler, which heats a large house, hall and function room.

Nitrogen fertiliser is being reduced by 10% each year, replaced with other sources of nutrients including digestate. Andrew also hosts fungicide trials every year and this year’s new combine with on-board weighing will give more accurate data from the trials.

In 2015 he stopped using insecticides and believes the business is no worse off for it.

Andrew’s five-year plan is to continue increasing non-farming income, with the conversion of an old piggery to industrial units his latest project.

Recent machinery investments have set the farm up well, with some spare capacity so no significant fixed cost increases are expected for the next few years. Over that period, reliance on pesticides and other artificial inputs will be further reduced.

Keeping a tight rein on all costs, Andrew aims to be well-placed when a new agricultural policy is introduced.

“Andrew is proactive over many of the risks to the business, including Brexit. He has reduced costs through adopting conservation agriculture and his excellent public engagement shows he is a real ambassador for the industry.” 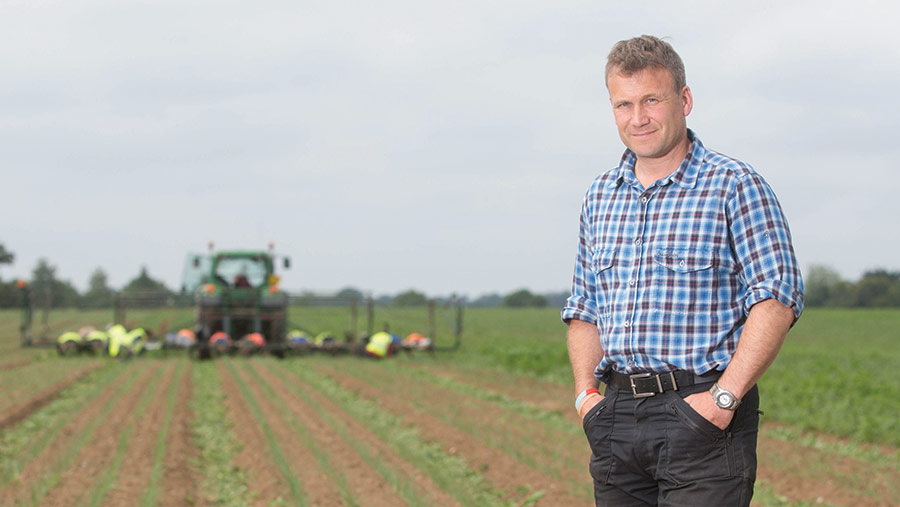 Multiple parcels of land across a wide area, high-risk organic cropping and managing more than 20 full-time and up to 60 seasonal workers – these are daily challenges for Mike.

In eight years since joining James Foskett Farms, Mike has dramatically increased the organic enterprise, overseen a rise in cropped area and huge investment in storage, a workshop and staff facilities.

Carbon footprint is being reduced through 300KW of solar and an Organic Entry Level scheme provides wildlife margins, among other benefits.

Profit from high risk crops can fluctuate wildly from season to season. Mike manages price risk by having as much as possible on fixed price contracts, and marketing potatoes and onions through a co-op and a producer organisation (PO) respectively to add value.

The ware potatoes are mainly earlies and are 70-75% contracted pre-season.

Mike oversees the marketing of a growing volume of organic produce, including to national box schemes and farm shops. The business also has many individual seed potato customers.

Organic production is also largely priced before planting. The risk here is not in the price but in production volume, quality and production costs.

His attention to detail clearly extends to investing in and empowering his team of 21 full-time and 60 seasonal workers. There have been significant internal promotions to finance manager, irrigation manager and operations manager.

A comprehensive training plan motivates staff, with courses ranging from crop storage to management and leadership. Health and safety good practice is integral to day-to-day operations, evidenced by a thorough induction process.

An annual outing to Newmarket races, several barbecues and a further trip for the seasonal workers also help with motivation.

Staff meetings at several levels are held regularly where an update is given on the performance of the business, plans, and health and safety. Daily texts inform staff of who is working on what and where.

The farm hosts visits for a range of groups, from students to local farmer discussion groups and growers from other countries.

Mike drives the capital spending plans for machinery and equipment, with the larger investment decisions such as the recent new store, workshop and staff facilities made in conjunction with his fellow director and employer James Foskett.

Changes in technology have driven recent investment – for example, in a Tillerstar cultivator, which gives better quality crops and less damage but without the cost of traditional destoning.

Machinery is mainly owned, with a significant proportion including destoners, tractors and cultivators bought second-hand

In-house machinery manufacturing includes a system for in-season injection of liquid fertiliser for potatoes and onions, as well as an inter-row gas weed burner, which recently emerged from the workshop and is working well.

Much has been learned in the conventional side of the business, from going into organics – far more mechanical weeding is now done on the conventional crops than before the organic side was established, says Mike.

Mike is aiming for a 25-35% rise in turnover over the next five years, with continued development of the organic enterprise and steady growth in the potato business.

He will also further extend the potatoes and organic areas, taking on new land where it becomes available and fits with the plan.

If access to non-national seasonal labour becomes more difficult, he would like to employ more local labour but if this is not possible, further mechanisation is likely to result.

“Mike’s excellent attention to detail is shown throughout the business, from crop production to machinery maintenance. He demonstrates a strong sense of responsibility for staff welfare and their development.” 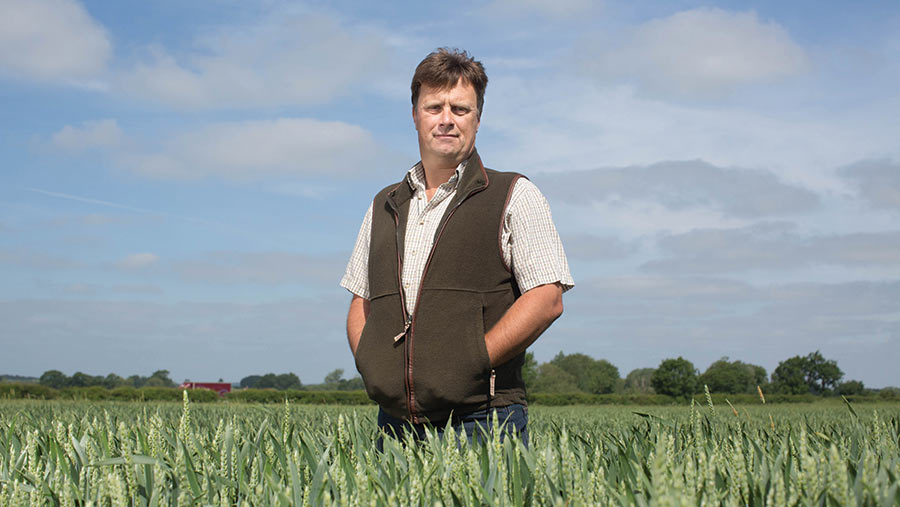 It’s 50 miles between the blocks of land that Chris Singer manages with one set of kit and staff, with large towns to negotiate between farms.

He runs a complex, mixed farming business including a partnership, two sole traders and a company.

Chris began working for the Carington family in 2004 as a key worker in a tractor driver role. He was promoted to a manager role in 2007 and now oversees all day-to-day farm management, also advising his employers on future development.

The acreage under his management has grown from 223ha on one farm to 1,675ha in five main locations, including a 390ha farm in Lincolnshire.

Apart from the practical challenges, this brings plenty of paperwork too, with four BPS claims to complete.

Several successful Open Farm Sundays have been held and the farm hosts tours for the annual village day. Chris regularly takes tractors and other machinery to the local primary school and has also taken lambs to bottle feed at schools.

Some crops are grown on contract for Budweiser, with malting premium achieved on every load. About 40% of the expected tonnage of crops is forward sold before harvest to help with cash flow and risk management, with 20% going into pools.

Markets are monitored weekly, with the rest of the crop sold through the year to even out cashflow and avoid market troughs.

Chris grows seed barley on contract and has also developed a more local market, growing maize and forage crops for a neighbouring 500-cow dairy, an arrangement that began in a small way four years ago. This helps with blackgrass control and means the farm has not needed to grow oilseed rape for some years.

Four years after Chris joined the business, the existing soft fruit pyo and asparagus enterprises ceased. The 60 suckler cattle also went in 2013, replaced by 150 Mule ewes to graze steep grass banks on chalk land at the home farm in Bledlow.

Ewe numbers have since been expanded to 250 with lambs generally sold as stores in August because the chalk land cannot hold all the sheep in a dry summer.

Managing agents have been phased out since Chris’s appointment. He runs the 1,285ha Buckinghamshire-based part of the businesses with just two full-time staff and one summer helper, involving them in day-to-day decisions.

His machinery policy runs tractors to between 4,000 and 5,000 hours – too far past that and the drop in residual value is too great.

GPS kit is used to minimise input use and the drill tractor runs an RTK steering system.

He marks his biggest achievement as the turnaround of run-down tenanted farms as they come back in hand, increasing productivity and incorporating them into the in-hand farming business.

Chris entered all the farms in ELS originally and now has two CSS agreements running. A third has just been signed, which will see 344ha put into the mid-tier scheme.

Farming profitably without the need for large subsidies is the aim, at the same time reducing reliance on chemistry, says Chris.

To do this he will monitor by field and by enterprise for yield and profitability, making decisions accordingly. Cropping plans are likely to include cover crops, fallow and possibly multi-variety fields, he says, with the best use made of the farm’s natural resources as more land is taken back in hand.

“Chris successfully manages a very challenging business spread over a large area. He has overseen rapid and frequent expansion but also makes the time to engage with the next generation, regularly giving talks to local schools.”

“Farm managers are in positions of significant responsibility.

They must have the technical knowledge to run an efficient, productive operation but also the foresight and ability to drive a programme of continual improvement.”