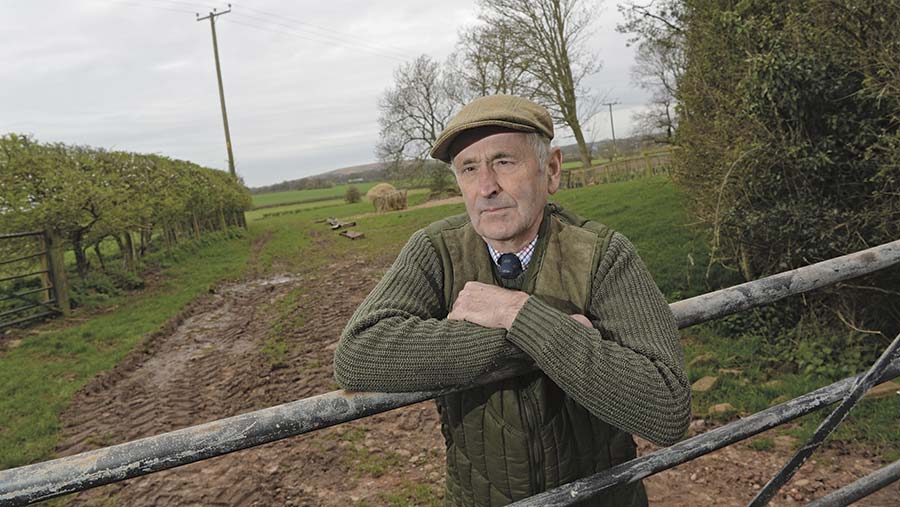 A 74-year-old farmer has won a long-running dispute with the Church of England about the ownership of his land.

It has taken two years for Richard Tyacke, of Maxstoke, Warwickshire, to be granted ownership of 16 of his 120ha after discovering the Diocese of Birmingham had wrongly registered itself as the freeholder.

The confusion dates back to the 1880s when the land was part of the Stoneleigh Estate, and the Church of England was granted a yearly “rent charge” of £30 for the 16ha for the upkeep of the local church and the augmentation of the local vicar’s income.

Mr Tyacke’s family rented and farmed the land from 1896 until 1942 when they bought the land. They continued to pay the £30 each year.

Unknown to Mr Tyacke, in 2010 the Diocese of Birmingham registered the freehold of the 16ha in its name by submitting a “statement of truth” claiming ownership to the Land Registry.

According to Howkins & Harrison land agent James Collier, the Land Registry is willing to accept these written statements claiming ownership from large landowners such as the Church, where documents relating to ownership are missing.

About six years ago, Mr Tyacke came across a couple of agents from Knight Frank, the managing agents for the Diocese of Birmingham at the time, on his farm, who said they were inspecting the land “owned by the Church”. They said the Church owned the freehold of the land and that Mr Tyacke was only a tenant.

“He challenged them to provide evidence of this, of course, but nothing was forthcoming,” said Mr Collier.

When Mr Tyacke came to register his ownership of the farm with the Land Registry in 2016, his solicitors discovered what had happened.

The legal team was able to produce a copy of the original rent charge document from 1883 and the 1942 conveyance of the freehold of the whole of the farm (including the 16ha in question) to the Tyacke family.

“It was clear the diocese didn’t own the land and I have no idea how they managed to come to the conclusion that they owned it,” said Mr Collier. “They submitted the application recklessly and based on nothing more than an assumption by their advisers that the £30 annual payment showed a landlord/tenant relationship.”

Faced with these written records, and without any of their own, the diocese agreed to surrender the land and cancel its freehold registration. The land was then properly registered in Mr Tyacke’s name.

When he approached the diocese for reimbursement of incurred costs (of about £1,700) and an apology, the Church, via solicitors Shakespeare Martineau, denied any responsibility and instead blamed the Land Registry for accepting its application.

“As the mistake was that of the Land Registry in accepting our application, we are not able to accede to your claim for costs,” the firm wrote.

Mr Tyacke said the actions of the Church were “extraordinary” and he is yet to receive an apology.

“It’s about half-a-million pounds’ of land in today’s values,” he added. “If it happened to me it could happen to anyone. If I had died not knowing, my family would have been left in such a difficult position. I dread to think what the outcome may have been.”

Farmers Weekly contacted Shakespeare Martineau for a response, but it has a formal policy not to comment on any specific case.

“The Land Registry has now corrected their mistake and compensated Mr Tyacke.  As a gesture of goodwill, the Church of England wrote to Mr Tyacke, agreeing to waive the right to any future payments on the land.”

The Land Registry has stated that, though it did not make an error in this case, the Land Registration Act 2002 includes a scheme to “compensate or indemnify” those who suffer loss because of a mistake in the register. Some of Mr Tyacke’s expenses have been refunded by the registry.

Julie Robinson, of Roythornes Solicitors, said as long as there are gaps in the official land register, this kind of thing could happen. She encourages farmers and estate owners to get any unregistered land formally registered at HM Land Registry (or equivalent registries in Scotland and Northern Ireland).

If your land is unregistered, you should complete a one-off voluntary registration, with a 25% discount on the usual fees.

A farmer needs to show “good root of title” going back at least 15 years and an unbroken chain of ownership, says Ms Robinson. The usual proof would be a formal conveyance under which the ownership was transferred to the current owner.

It could also be an “assent”, the transfer of a property to a beneficiary after someone has died. Most owners have a bundle of deeds, which record dealings with the land, and which should be submitted to the Land Registry as part of the registration process.

If your land is unregistered, you are more vulnerable to adverse possession (squatters’ rights) claims – the Land Registry does not know you own it, so there is no way to let you know if someone else is trying to register it in their name.

Anyone can do a free online search of the Land Registry database to see whether a particular parcel of land is registered. For a small fee, a copy of the registered title and title plan can be downloaded. If an initial informal search throws up an unexpected result, such as someone else having registered ownership of your land, you should take legal advice.

In Mr Tyacke’s situation, the Church of England did not need any other documents to prove ownership. In some cases, institutions (ancient charities, Oxford and Cambridge colleges, the Church), or aristocratic families, have held land since before formal conveyancing documents were in wide use.

They have no “root of title” to produce to the Land Registry to prove their ownership. In those cases, the Land Registry requires a statement of truth, with evidence, to be submitted with the application for first registration.