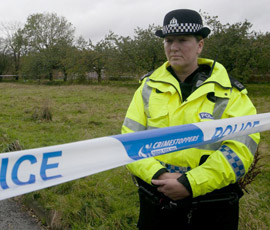 A farmer is distraught after a suspected arson tore through his barn, causing thousands of pounds of damage.

The fire ripped through a barn in Coventry, with the flames engulfing a tractor and a baling machine inside the building.

Fifteen firefighters were called to tackle the blaze at the farm in Longford on Monday (20 February).

They worked through the night to bring the fire under control and remained at the scene to dowse the flames on Tuesday morning.

The blaze spread quickly through the building, where John Hanson, a pig farmer, was storing hay and straw used as feed and bedding for a herd of rare pigs which he keeps on another farm.

Mr Hanson, 55, told the Coventry Telegraph: “I’m absolutely devastated. I was just about to have my tea when someone knocked my door and asked if I knew my barn was on fire.

“The fire was well going by the time I got there. It was ferocious.”

He believes the fire was started deliberately after he saw two young men vandalising the barn on Friday.

“They pushed bales over and smashed windows in vehicles,” he said. “I could see them through my binoculars and they left footprints.

“Whoever set fire to the barn left footprints like the ones that were left on Friday.”

Insurers were due to assess the cost of the damage, which Mr Hanson fears will “cost thousands and take months to fix”.

“Whoever did this has no morals at all,” he said. “I’m absolutely disgusted that anyone could do this.”