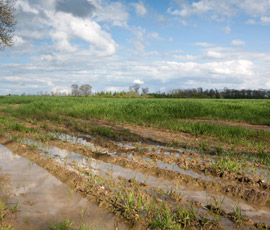 Conservation groups are furious over government plans to relax rules to let farmers dredge rivers and streams to alleviate flooding.

Farm minister David Heath said river dredging was “top of the agenda” in the battle to prevent farmers’ fields from flooding.

Historically, the dredging was done by the Environment Agency, but its budget has been slashed and it can no longer afford to do the work.

Farmers and landowners, especially in the South West, are frustrated that their fields have stayed under water for months costing them millions.

They have welcomed the news that DEFRA wants to give them more power to clear drainage channels to drain water from flooded fields and back into the streams.

But the plans have enraged Britain’s anglers and birdwatchers.

The row has created an unlikely alliance between anglers’ organisations and the RSPB. The former, united by the Angling Trust (AT) and the Salmon and Trout Association (STA), fears that farmers would wreck the spawning grounds of endangered species such as salmon.

“Certainly farmers are angry and some have had their fields under water for a year so we think it’s a bit political – the government had to be seen to taking some action.”
Rob Cunningham, RSPB head of water policy

The RSPB, meanwhile, prefers to have fields flooded for wading birds.

Rob Cunningham, the society’s head of water policy, said: “Emotions are running high and there’s a lot of nervousness around and we only found out from Twitter messages and emails being passed about.

“Certainly farmers are angry and some have had their fields under water for a year so we think it’s a bit political – the government had to be seen to taking some action.

“But whether it would have worked is another matter. And it’s not just birds losing their habitat, it’s also voles who are the fastest declining mammal.”

The RSPB also has concerns about what happens to the spoil after dredging as well as the risk that speeding up the flow could put properties downstream at risk of flooding.

Paul Knight, head of the STA, said: “We are dead against it. Much of the dredging will be on upland streams and so salmonid spawning and juvenile habitat will be destroyed.

“It is a crazy idea, especially as we are trying to achieve the European objectives improving rivers. We should be trying to work with rivers naturally, not put yet more human impact on them.”

Mark Lloyd, head of the AT, said “Dredging rivers can have a very severe impact on fish and other wildlife and it can make flooding significantly worse further downstream. We must not repeat the mistakes of the past by trying to stop rivers spilling into floodplains.

“Dredging most rivers to stop flooding would be a massive, pointless and damaging waste of public funds. We should be blocking up drainage ditches in the uplands to reduce peak flows and store water in natural aquifers to prop up summer flows.”

But Ian Moodie, NFU flood management adviser, said: “This is a matter of acute concern for farmers and some have even been fined for doing the work themselves.

“It’s a wider issue than just damage to crops, it affects protected areas, grazing and it even hits the tourist trade. It’s not going to be a free for all for farmers – we’re just trying to be reasonably pragmatic.

“The whole issue involves millions of pounds and all we all want is a simpler system. Anglers aren’t the only ones concerned about the health of our rivers.”