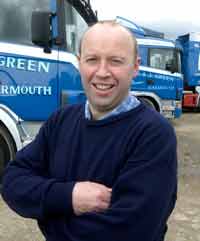 Since last month’s flooding and torrential rain we have had a spell of fine weather allowing us to take a late cut of hay-baling 50 acres within five days.

This weather has also allowed new born autumn calves and their mothers to stay out at grass. We are now seeing the benefits of our diet feed wagon, which tops up cow bunkers in the field every second day.

Stubble turnips which were sown into ploughed land after spring barley are growing well, but one field broadcast onto the stubbles after combining has been slow to germinate and this field may have been sown too late.

Last month saw the dispersal sale of one of the longest established Simmental herds in the UK. The Hockenhall sale held at Beeston Market was an incredible sight with such a fabulous show of cattle being eagerly bid for by buyers from all over the UK and Ireland.

Even first time buyers were evident at the sale which goes to show even more breeders are beginning to realise the potential of the Simmental breed.

Unfortunately, attending the dispersal sale resulted in me missing the first local tup sale of the season, thankfully my niece attended on my behalf and despite my poor phone reception at Beeston she managed to secure two good tups without going over my budget.

These tups are destined to run with my new Mule gimmers which were an expensive purchase averaging £155 a head – thank goodness I kept a number of homebred Texel cross Mule gimmers for replacements.

It was an honour to be invited to the Farmers Weekly Awards evening in London. This was a tremendous night and it was great to meet some of my fellow Farmer Focus writers. I did note however, that by the end of the night it seemed to be the Scot’s who were in the majority left at the bar.