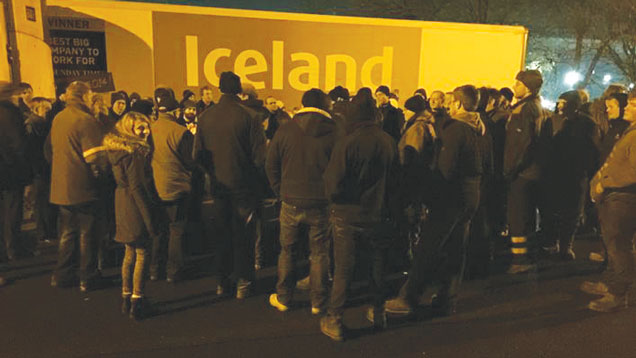 Dairy farmers staged another night of protests against Iceland Foods in their campaign for fair milk prices.

Protest organisers Farmers For Action (FFA) said about 200 farmers took part in each of the blockades at Iceland distribution sites in Warrington (pictured above), Cheshire, and Swindon, Wiltshire.

Iceland has been accused of insulting British farmers after it slashed the shelf price of four pints of milk from £1 to 89p.

The budget retailer is selling its milk as a loss leader in their stores which has angered dairy farmers who have been hit by a series of crippling price cuts.

The move has angered both FFA and the NFU who have accused Iceland of devaluing milk just to get customers through its doors.

Dairy farmer James Williams who travelled from Hereford to take part in the protest at Iceland, Warrington, tweeted: “We will not stand for you (Iceland) devaluing our product.”

Iceland has responded to the accusations by saying the price it pays its milk suppliers has not changed. However, it has refused to tell FFA what they pay farmers for their milk.

The retailer’s bosses told FFA it had taken a £12.5m hit by cutting the price of its milk, which it did to protect 25,000 jobs.

Some farmers are being paid as little as 21p/litre for their milk which currently costs in excess of 30p/litre to produce.

The milk price crash has been blamed on a drop in global dairy prices, oversupply of milk and the Russian ban on imports of EU dairy produce.

However, FFA chairman David Handley believes processors and retailers are using the slump in global dairy markets as an excuse to squeeze its profit margins.

Giving evidence at an Environment, Food and Rural Affairs (Efra) committee meeting on Tuesday (25 November), Mr Handley told MPs that farmers were “suspicious” about the claims when 85% of the milk produced in the UK remains in this country.

“Until we start getting some evidence to show that what has gone on globally has contributed to a cut of more than 8p in our milk price, I don’t think you’ll see farmers stopping protests,” he added.

FFA blockaded the same Iceland distribution site in a protest on 16 October in the week the 89p milk offer was announced.