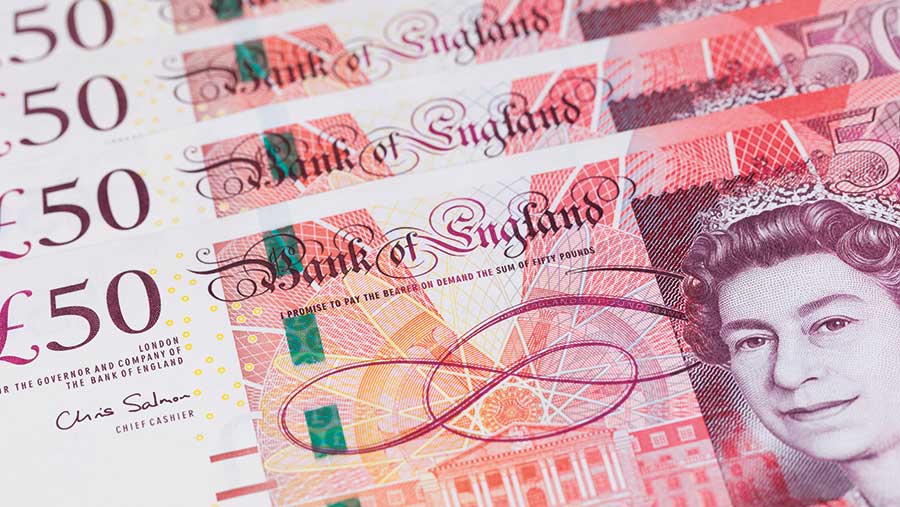 The freefall of the pound since the referendum vote 12 months ago has been something of a lifeline for British farmers.

However, this “Brexit boost” could be short-lived and businesses should prepare.

The pound’s 30-year low has helped farmers reeling after three years of low commodity prices, by making UK exports more competitive and 2016 BPS payments worth 19% more than 2015 (see “Outputs” and “Inputs” below for more).

But the “double-edged sword”, says Anand Dossa, economist at the NFU, is that input prices have also been pushed up and this is likely to continue, eating into farmers’ margins unless “more meaningful” farmgate prices are seen.

With Brexit negotiations under way and British politics in disarray, the pound is expected to continue to fall, with HSBC forecasting sterling to reach parity with the euro by the end of the year.

Inflation, also spurred on by a weak pound, was at 2.9% in May, the highest since June 2013. This is likely to mean companies that have so far held back from passing increased costs on to their customers or suppliers will be forced to do so before too long.

These include supermarkets, warns Mr Dossa, which are operating in an extremely competitive retail market, driven by the rise of the discounters.

At some point they will have to pass this extra cost on to their customers – or their suppliers.

Input suppliers will also have to start passing costs on, warns Michael Haverty, economist at Andersons. This means the gap between agricultural output prices and input costs will start to close.

The Bank of England is still holding off from raising interest rates, but only just. Any rate increase – which advisers think is likely this year – will add to business pressure as the cost of borrowing rises.

However, Mr Haverty says this increase might only be a small amount, perhaps 0.25%.

But even now some farmers are losing money on some arrangements like contract farming and Farm Business Tenancies, warns Gary Markham director at tax and accountants, Land Family Business.

“If we hadn’t had the weak pound in the past year, it would have been a disaster,” he says.

“We’re in a holding position, but not a sustainable position. The message is don’t rest on your laurels because of that – we have a lifeline now to get ourselves sorted.”

What can farmers do to stay ahead?

Now is the time to start thinking like a business person, says Gary Markham.

Review your business structures. Separate land into “core acreage” – land that is owned and land that is rented under an Agricultural Holdings Act tenancy – and “addition” land – which is either contract farmed or rented under a Farm Business Tenancy.

Then look carefully at the benefit of farming the additional land, as many farm businesses are unprofitable in these areas, particularly if they are paying £120/acre upwards for rented land.

Consider your soft skills. These are particularly important and, in Mr Markham’s experience, will make 10 times more difference to a business than just drilling down on costs, he says.

Such skills include the ability to manage and communicate with your family and staff and to motivate people to realise your vision for your business.

If cashflow is a worry, speak to your bank manager as soon as possible so you can decide on the best course of action together.

The more fully aware the bank is, the more likely it will be to help you.

Just because interest rates might be on the rise soon doesn’t mean businesses should necessarily be put off, if that can afford to borrow.

Most entrepreneurs need to borrow to grow and your bank should only lend what you can afford to repay – this should not be based on the value of your assets.

Farmers should also focus on what costs they can control, says Andersons’ Michael Haverty. This might include looking at alternative models such as share farming arrangements.

Outputs – what has happened since the EU referendum

Inputs – what has happened since the EU referendum

20% shortfall in seasonal workers this year