The Farmers Weekly Awards 2018 Farm Supplier of the Year is Compass Tractors.

Robert Chapman, who nominated Compass Tractors for this award, is in no doubt about the effect the dealer has had on his contracting business.

“I would never have got where I am today without them,” he says.

Where he is today is running a 2,800ha contracting business on the Isle of Wight, built up from scratch in just eight years.

See also: All the latest news from the Farmers Weekly Awards

Mr Chapman has worked with Compass from the very beginning. When he was setting up his business, he emailed nine machinery dealers, enquiring about buying two Fendt tractors. 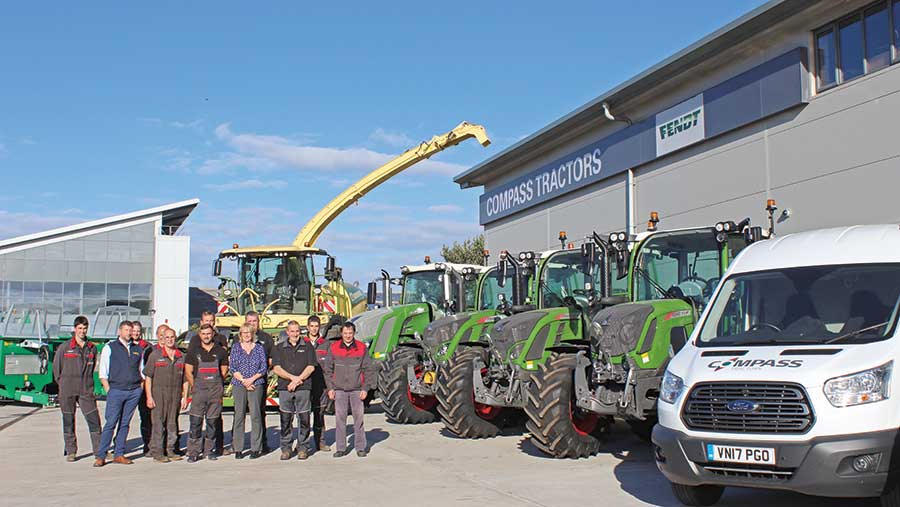 The team at Compass Tractors

“Justin was the only one who got back to me,” Mr Chapman recalls, referring to Compass managing director Justin Nichols.

“Until I bought the tractors, that is – then they all wanted to talk to me.”

The 30-year-old now runs a fleet of 12 tractors bought from Compass.

He cites the quality of service it provides as a key reason why he has kept coming back. That’s quite an achievement, given that the dealer is located in Bridgwater in Somerset, so getting to the Isle of Wight involves a ferry ride.

“We’ve got Massey, New Holland, Claas, John Deere and Case dealers locally,” Mr Chapman says, “but I get better service from Compass than I do from the other dealers in my area”.

To illustrate the point, Mr Chapman tells of one occasion when, while working a forager late into the evening, an accelerator bearing broke.

He sent a text message to Compass’ forager fitter at 10:30pm asking for help – knowing that replacing the bearing was a four-hour job.

After confirming the diagnosis over the phone, the fitter headed for the Compass yard to get a new bearing, while Mr Chapman booked him on the first ferry to the island.

“He was in my yard at half past five in the morning and we were chopping again by half past nine,” he says proudly. “You can’t beat service like that.”

Justin Nichols says this focus on the customer is at the heart of his business ethos. “We keep the customer going at all costs,” he says. “And it works – they come back year after year.”

The quality and condition of the machines Compass supplies is another reason why Mr Chapman nominated the dealer.

“I buy tractors a year old, but they always come to us in brand-new condition,” he says. “And he always puts the CB radio in, the carpet in the cab – all the finishing touches”.

Mr Chapman also appreciates the business advice he got from Compass in the early years.

He was barely 21 years old when he started his business and freely admits: “I didn’t have much business sense at all then. He’s taught me a lot, as well as sold me a lot.”

Compass also has a contracting wing to its business, which helps it understand the pressures facing a contractor.

Mr Chapman says his relationship with Compass is a true partnership. “I wouldn’t call Justin a supplier – he is part of my business.”