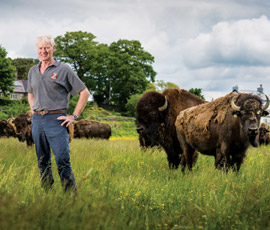 North Wales estate owner and farmer Robert Newborough has been named as the 2013 Farmers Weekly Farmer of the Year.

Robert has transformed a conventional farm business at Rhug Estate, Corwen into one of the biggest and most successful organic farming businesses in the UK.

The business has grown by pursuing an ambitious diversification strategy, which has been based on cutting out the middleman and selling directly to consumers.

Robert, who was also named Diversification Farmer of the Year at a glittering awards ceremony in London on Thursday night (3 October), has created an impressive business with a turnover of £5.5m and employing 85 people.


Farmers Weekly editor Jane King said the judges had been impressed by his determination to seek out alternative business opportunities and open up new markets.

Robert inherited the estate, as well as the title Lord Newborough, following the death of his father in 1998.


He has created a bespoke “Rhug Organic” brand and sells produce direct to delis, baby food companies, airlines, trains, as well as top restaurants and hotels in London and the Far East.

Rhug’s meats have also scooped prestigious awards for their flavour and taste and they can be found on the tables at fine restaurants, including Raymond Blanc’s Le Manoir aux Quat’Saisons at Oxford.

A busy UK mail order service, and a stall at the Borough Market in London, which sell meat straight from the farm, have added value to the business and helped to promote Rhug products.

In 2011, the business developed further when Robert decided to invest in a new farm shop, bistro and take away on the farm site.

Rhug has a dedicated cutting plant and a team of nine butchers. Meat orders are taken daily, then prepared, packed and dispatched on the same day.

Although Rhug is undoubtedly bigger than most farm estates, its mantra to ensure that every asset – either big or small – is “sweated” could be used to create a successful business model for any farm size.

The whole business is based on sustainability and making use of every resource.

Redundant farm buildings that are used for lambing in the winter are used for caravan storage and inside events in the summer.

Robert is also serious about renewable energy and the diversification into alternative energy is based on maximizing the use of natural assets on the farm and making the business less reliant on farming income.

The full list of winners from the 2013 Farmers Weekly Awards are: