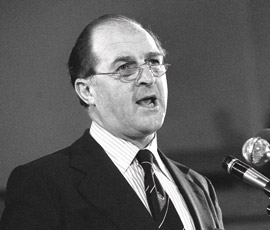 For a man who has achieved worldwide recognition in agriculture and politics, Henry Plumb’s career had what appeared at the time to be an inauspicious start.

Aged 15 and a schoolboy at the beginning of the Second World War, he was taken out of school by his father to help on the farm. All Plumb senior’s farmworkers had been called to the army and his teenage son was needed to keep the farm afloat. It was believed the war would be over in months and that Henry would be able to return to school to complete his education, but six years later it was too late and he never went back.

It can be argued that this initiation to hard work early in life provided a solid background to all his subsequent achievements. For as well as doing much of the work on 121 mixed farming hectares in Warwickshire, he joined the Young Farmers Club at Coleshill, where he participated in all activities, including finding a wife, Marjorie, and learned about life.

But tragedy struck in 1952 when Henry’s father died aged 58 and Henry became head of the family, aged 27.

The county secretary of the NFU became his mentor and so began the off-farm career that has dominated his life since. The young man became active in the union and was soon elected to its national council. In 1964 he was elected NFU vice-president aged 38 – the youngest ever office holder of the union.

He was a member of the Northumberland Committee inquiry on the outbreak of foot-and-mouth in the late 1960s when Farmers Weekly’s predecessor Farmer and Stockbreeder credited him with single-handedly persuading the committee to recommend prohibiting importing carcass meat from countries where the disease was endemic.

By 1970 he was president, a job he did with distinction for nine years. During his term in office Britain entered the European Economic Community and Henry successfully negotiated greater support for British agriculture in the newly formed Common Agricultural Policy.

“Lord Plumb has raised the profile of UK agriculture over many decades as NFU president and European Parliament president – leading marches on Whitehall, creating the International Food Agriculture Trade Policy and championing equitable and open trade. For such a charming man, he has been ruthless in his ambition to give British farmers a fair deal.”
Jane King
Editor Farmers Weekly

He was a strong supporter of the pro-market campaign and stressed that Britain no longer had the economic power to deliver cheap food.

When his presidency of the NFU ended his son John, who was by then running the family farm, asked “What are you going to do now?”

“Come back to the farm to help you,” Henry replied. “What would like me to do?”

“Well, you can start by sweeping the yard,” said John. That, at least, is Henry’s story and it was then, he says, that he decided to go into politics.

He was elected MEP for the Cotswolds in 1979 and almost immediately became chairman of its agriculture committee. Several other chairmanships followed until he became president of the European Parliament itself in 1987, the same year he was made a peer.

Meanwhile, he travelled widely, developing a broad understanding of the problems of agriculture and getting to know the most influential leaders around the world, many of whom honoured him.

He has supported and chaired many UK farming organisations and now, in his senior years, he has set up the Henry Plumb Foundation to help young people through funding and mentoring to get a foot on the farming ladder and perhaps, like him, become inspirational industry leaders.

It’s fitting that his favourite Churchill quote, said in his presence, sums up his life so well: “You can make a living by what you get. You make a life by what you give.”

“We are delighted to honour someone who has been such a powerful and positive influence in British agriculture – championing fairness for its producers and inspiring professionalism throughout the sector.”