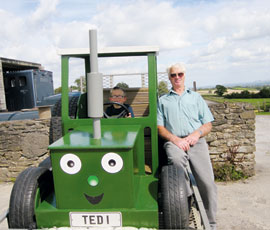 For tractor-mad kids, the adventures of Tractor Ted, the little green tractor and his big farm machines, are the stuff of dreams.

So imagine the excitement of one Tractor Ted fan, Bobby John Murch, aged five, from Umberleigh in Devon, when he got to star in a Tractor Ted DVD.

In July, Bobby won Farmers Weekly‘s “My Favourite Season on the Farm” art competition with a drawing of his Dad, Ashley, corn-carting on the family’s 404ha farm.

Bobby’s prize was a day at Tractorland, Tractor Ted HQ at Highchurch Farm, Hemington in Somerset and a role in the new DVD Tractor Ted More Big Machines, in which Tractor Ted meets a giant pea harvester and learns all about pea growing and harvesting.

For Bobby who is, according to his Dad, “a real fan”, the trip was a dream come true.

Bobby travelled up to Somerset on a sunny September day with his father, grandfather and big brother Aaron, aged 10.

“You could tell it was a big deal,” Alexandra Heard, Tractor Ted founder said. “He was dumbstruck when he met Les and the crew and had his photo taken with them.”

Les, the farmworker, is something of a cult hero with Tractor Ted fans. Usually the fall guy, in the scene filmed with Bobby and Aaron he was cast as the hero, helping the boys rescue Fudge, the Jack Russell/Norfolk Terrier cross, who gets stuck in the stable.

“Bobby hasn’t stopped talking about it since he got home and I haven’t managed to get him out of the duvet yet.”

“It was really fun finding the dog,” Bobby said. “But we couldn’t get the door open so we had to go and get Les to help.”

Tractor Ted aims to educate as well as entertain its young audience and Bobby soon learnt that being a film star was hard work. The one scene, just two to three minutes in the final 40-minute DVD, took two hours to film with several takes.

But there were rewards too: Bobby got the pick of the Tractor Ted shop, stocking up on DVDs, books, toys and a prized duvet set.

“I thought he had it all already,” said Ashley. “He’s certainly worn the DVDs out with watching them again and again. He knows all the words before the narrator speaks.”

Mum, Emma added: “It was a lovely day. Bobby hasn’t stopped talking about it since he got home and I haven’t managed to get him out of the duvet yet.”

“It was such a success, we’d definitely do it again,” Alexandra Heard said.

So, Tractor Ted fans, crayons to the ready…