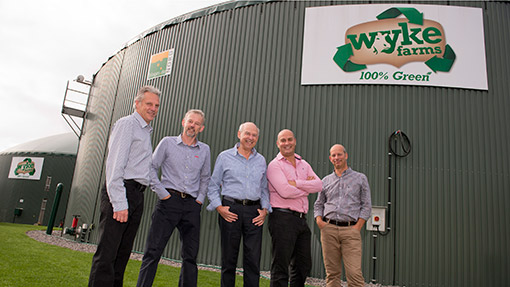 Operating on the Clothier family’s fourth-generation farm near Bruton in Somerset, the success of Wyke – a top cheddar brand, £85m global turnover, and exports to 160 countries – has been a result of forward thinking, gutsy innovation, and a view to external factors.

The latest green investments, initiated after rising energy prices and volatile markets and weather, are no exception. The turning point came in 2012 when a monthly electricity bill £10,000 higher than usual arrived. Volatility had pushed prices up, says Richard Clothier, Wyke’s managing director, and had highlighted the business’ vulnerability to costs outside its control.

Something had to be done. After thorough research, Wyke embarked on a £10m project, installing three biodigestors, two generators, 380 solar panels, and a water recycling plant.

The company is now 100% self-sufficient in electrical energy and saves £30,000/month on bills. Its newly installed water reusage plant will save up to 850,000 litres/day, and overall the company hopes to cut energy and water bills by £2m/year.

“When you approach your business in this way and ask how I can be greener, you often find cost cuttings in ways you would not have thought of,” says Mr Clothier.

As well as saving money, a stable energy and water supply has been a key driving factor, says Mr Clothier.

“If you’re in the UK, which relies on outside energy sources, you need to be self-sufficient,” he says. “If you look at the crisis in Russia at the moment, it could easily turn into an energy crisis.

“We have to look at what we can do to secure ourselves – if we’ve not got some of our own energy, we’re completely at the mercy of energy prices and world scenarios.

“We’re also going to see more swings in the weather and water will become more of a precious resource, but there are things we can do as farmers, like capturing water on our roofs.

“Renewable energy and sustainability are all part of making any business fit for the future.”

The changes have also added value to Wyke’s brand and helped differentiate it from competitors, says Mr Clothier.

“The green aspect fits into the cycle of nature – people like that – and as generations go by, people will get greener and weather patterns will force us to be more sustainable and more robust.”

Three biodigesters make light work of the farm’s waste, producing 2,000cu m of gas each and powering the Wyke factory, tenanted pig farm, and the AD plant itself. As well as the £30,000/month electricity cost savings, the AD plant earns 5p/kW from the grid, plus Feed in Tariffs (FiTs) payments, and is due to repay its investment within about five years.

Gas is converted into electrical energy by two 500kW generators, which supply 80% of the energy from one biodigestor to the grid, and 100% of energy from the second to the Wyke factory. Using the Renewable Heat Incentive (RHI), heat produced by the generators is recovered for use in the cheesemaking process.

When the third biodigestor comes online, it will be upgraded to remove carbon dioxide so that its gas can be sold directly to the grid, and making Wyke 100% gas self-sufficient.

About 35,000t of the farm’s waste, including cow slurry from Wyke’s 1,000 dairy cows, and waste from its tenanted pig farm, go into the biodigestors, plus 20,000t of lactose from the factory.

A further 65,000t of organic matter from Wyke and neighbouring farms, including rape straw, silage ends and apple pumice, is fed in.

“It’s a bit like our own agricultural recycling depot,” says Mr Clothier. Bacteria, pH levels and sulphites are carefully monitored by a computer system, and two full-time staff, including an engineer, maintain the plant.

Digestate from the process is starting to be spread on the farm, adding nitrogen, phosphates and potash, and it is hoped other local farmers will also use it. The company has built a 27,000cu m capacity lagoon to store the digestate.

An electric car, used for local deliveries, is powered by the AD plant and does 100 miles on one charge. “It’s effectively free to use,” says Mr Clothier. There are no fuel or road tax costs, insurance is low and there is minimal maintenance.

Wyke uses as much water as it processes in milk and on a busy day this can be up to 1m litres. Much of its water comes from boreholes and is therefore a key resource that needs to be managed, says Mr Clothier.

“Despite the recent Somerset floods, we still see water as a finite resource,” he says. “And it’s not inconceivable that there might be some sort of seasonal cost to water in the future. Being fit for the future means managing our water resources well.”

A £1.3m investment in a water reusage plant will cut water costs, make the farm more water secure, and reduce the volume of waste discharged.

Effluent from the factory will be filtered to remove matter, then put through a reverse osmosis process, which will remove particles, leaving just the water molecules, before being chlorinated. It is hoped about 85%, or up to 850,000 litres of water, will be recycled each day. 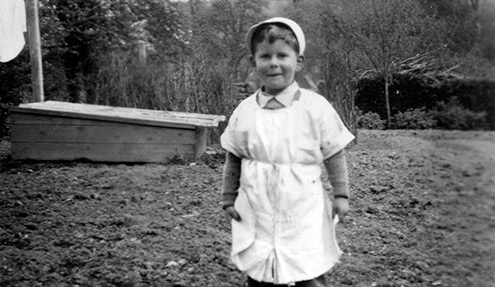 John Clothier, Wyke’s chairman, as a boy on the farm. 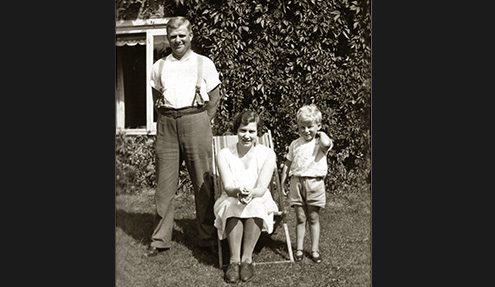 Tom and Ivy Clothier who started Wyke Farm and its cheddar, with son John who is now chairman of the company. 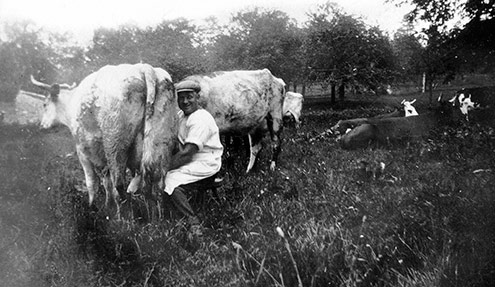 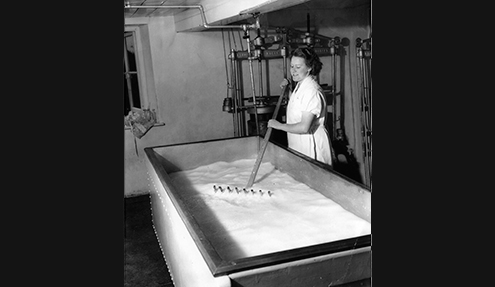 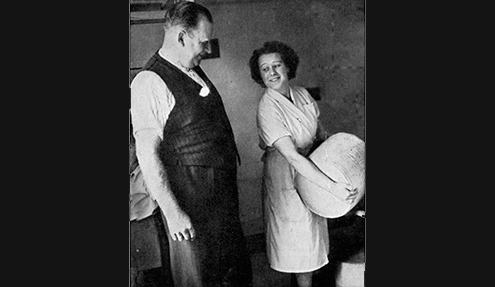 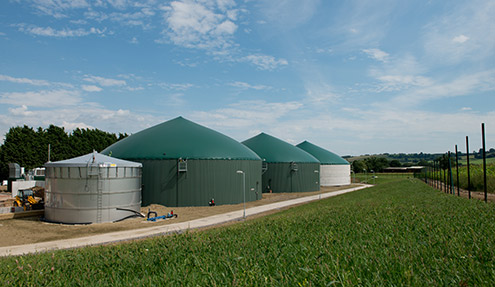 Today, Wyke’s AD plant which has made the cheese factory 100% self-sufficient in electrical energy. 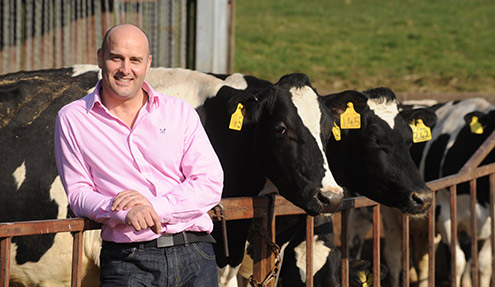 Rich Clothier, Wyke’s managing director, with some of the farm’s 1,000 dairy cows.

A 30kW and 50kW array, totaling 380 solar panels on the roof of the dairy unit, works in tune with the weather, explains Mr Clothier. When it is hot and sunny and the dairy’s refrigerators need to be kept cool, the panels produce more energy.

At peak times, the array produces 80kW. It powers the dairy unit and has 50% left over to sell to the grid. Heat produced by the chiller units is recovered and used for smaller tasks such as warming water for hand washing.

Wyke’s plan is to use other farm roofs to increase the number of installations to about eight and generate 1MW. The panels require virtually no maintenance, says Mr Clothier.

How every business can afford green technology

“We can all challenge our business to look at what we are using and wasting,” says Mr Clothier.

“If all dairy farmers looked at solar and water use, they might be surprised at the savings – and there are some simple solutions. The cost of solar and water reuse doesn’t have to be massive.”

He advises that when equipment reaches its end, replacing it with modern, efficient technology, running an energy survey to identify areas for savings, visiting technology installations and speaking to the many enthusiastic people willing to offer information.

Challenges to consider include potential changes in government support payments, says Mr Clothier, and having enough time to deal with Environment Agency bureaucracy.

“Planning can be an issue but we worked hard with the local community and they were supportive,” he says. “Securing finance can be tough, especially for newish technology, but Barclays has been very supportive and responsive.”

The only thing Mr Clothier wishes he’d done differently is start the greening process sooner, he says. The company’s green investments have reduced energy and water costs, made it more self-sufficient and secure for the future, and increased its brand appeal.

“We think going green is increasingly right for business and consumers,” he says.