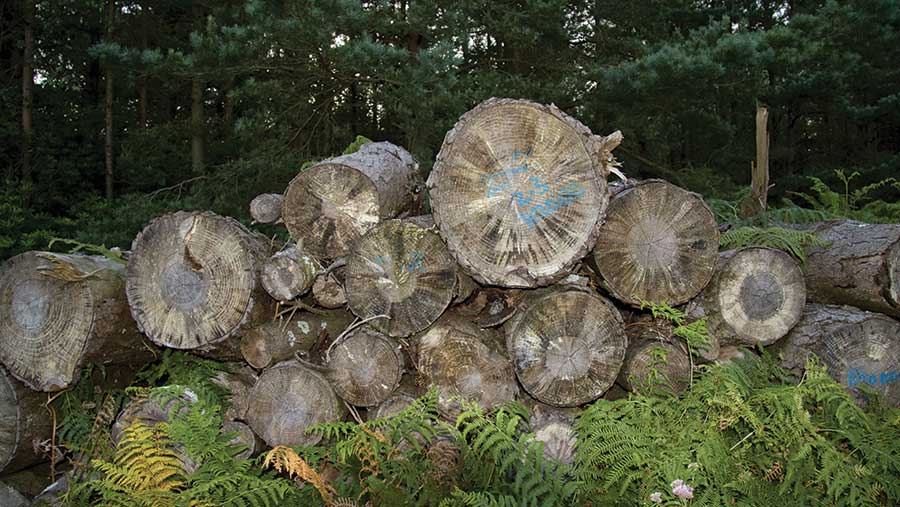 Farmers who have previously dismissed the possibility of managing their woodland to generate an income stream may want to think again.

New markets for wood have emerged in the past five years that are helping to change the equation on whether managing modest-sized blocks of broad-leaved woodland is viable.

Ian Tubby, principal adviser on business and markets at the Forestry Commission, says: “Even quite a small area of woodland – two or three hectares – could contain enough timber to make it worthwhile going in to extract and bring it to market.”

While larger blocks of woodland do offer more flexibility, smaller broad-leaf woods with good access and lots of standing trees can also stack up, he says.

There is also the option of a group of neighbouring farmers working together to take out timber across a range of more modest sites.

For example, there is a project in the south-west of England called Ward Forester, which takes timber from 536 woods, using economies of scale to make smaller blocks worth managing.

See: Useful links to get started in forestry

Timber demand is on the up

Over the past five years, private sector softwood production has doubled, in response to increased demand for timber and higher prices.

How much timber comes from a tree?

Forestry experts say there is room for yet more growth, with large contractors actively seeking timber grown in Britain and the UK being the world’s third-largest timber importer, behind Japan and China.

Mr Tubby says there has also been a rapid increase in demand for woodfuel since the introduction of the Renewable Heat Incentive for non-domestic sectors in 2011.

He estimates that meeting this requirement needs about 1m tonnes of woodfuel each year, which, along with significant growth in wood-burning stoves, is also driving demand. “That sort of market just wasn’t there three years ago and it is still growing,” says Mr Tubby.

Timber prices may have softened a bit in recent months, but overall the market is reasonably strong and sales of timber are also tax-free.

Know why you want to get into timber

The first step for anyone thinking of starting to manage their woodland is to really consider the objectives, he suggests. For some people it might just be about the income generated by timber. But for others it might be a way of improving rides for shooting or wildlife.

Taking time to think it through will help at the next stage, which is to apply for the Forestry Commission for a felling licence, he says. This is required of anyone felling more than 5cu m (see above).

“Licences are usually conditional on having a plan to restock the woodland and maintain forest cover, but if you’ve already thought about that it shouldn’t be an issue.

“We have just held a series of events around the country with the Chartered Institute of Foresters to improve the quality of the plans coming into us to speed up the approvals process.”

Identifying potential buyers is the other crucial step, but this will require a bit of legwork as the market for timber is very local. There is no real-time list of timber prices, as found with other agricultural commodities, Mr Tubby warns.

Local land and forestry agents should be able to help – but if a saw mill is in the area, contact them direct, he says. “You might like to look on the Biomass Suppliers list [see useful links]. If you put in your postcode it should flash up some local businesses that sell wood to the energy market and they might be interested in buying your timber.”

What you can expect to earn

As a guide, farmers will probably achieve between £35/t and £55/t at roadside for firewood-quality hard wood, which if they are prepared to season, split and sell themselves might achieve £150/t, he estimates.

Better-quality hardwood used by sawmills could attract much higher prices. Woodchip going into biomass boilers supported by the RHI might make £100-£115/t delivered.

Farmers should also factor in the value of any timber they might want to use on their farm, he says. A number are now running biomass grain dryers and there is also the option of hiring a mobile bench to saw timber into planks, beams and fencing posts for use at home.

Local agents should be able to advise on finding a contractor to carry out the work. Alternatively it is worth approaching the Confederation of Forest Industries (Confor), the Institute of Chartered Foresters or the Small Woods Association for advice.

Costs of felling and extraction vary according to circumstances, but average out at about £25/t. “You won’t become a millionaire, but if you can get a profit out of selling wood and deliver other benefits to the woodland at the same time it can be worth doing,” says Mr Tubby.

Useful links to get started in forestry