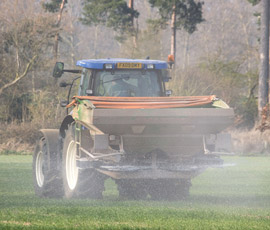 Slow farmer ordering has led the UK’s sole ammonium nitrate manufacturer to warn of potential logistical problems if business does not pick up in the next few weeks.

Deliveries of straight nitrogen to farm are about 200,000t down, representing 10% of total usage, said GrowHow marketing manager Ken Bowler. Compound product orders are about 150,000t behind last season.

The twin challenges of harvest and drilling have played a significant part in this, along with a nitrogen price about 14% lower than a year ago. The lack of movement in farm-delivered ammonium nitrate prices over the last few months has added to growers’ unwillingness to order – prices have hovered between just below and just above £300/t.

Manufacturers, importers and merchants no longer had the ability to hold large stocks of product and there were fewer hauliers able to move fertiliser than there had been in the past, which could lead to major issues in spring if orders did not pick up soon, said Mr Bowler.

The 200,000t order shortfall is based on expected winter crop drilling and leaves about 1.2m tonnes of nitrogen product to deliver by the end of March. If 10% of the winter wheat acreage and 15% of oilseed rape shifts to spring, this would take out about 100,000t of demand, reducing the pressure on deliveries

The UK is not the only region slow to order fertiliser – the third quarter of 2012 was a lethargic global fertiliser trading period in a relatively weak market, said a recent Rabobank report.

Global urea and potash prices were significantly lower than the previous quarter, while prices for potash and phosphate were relatively unchanged. Global potash prices have remained firm, rising by about 10%.