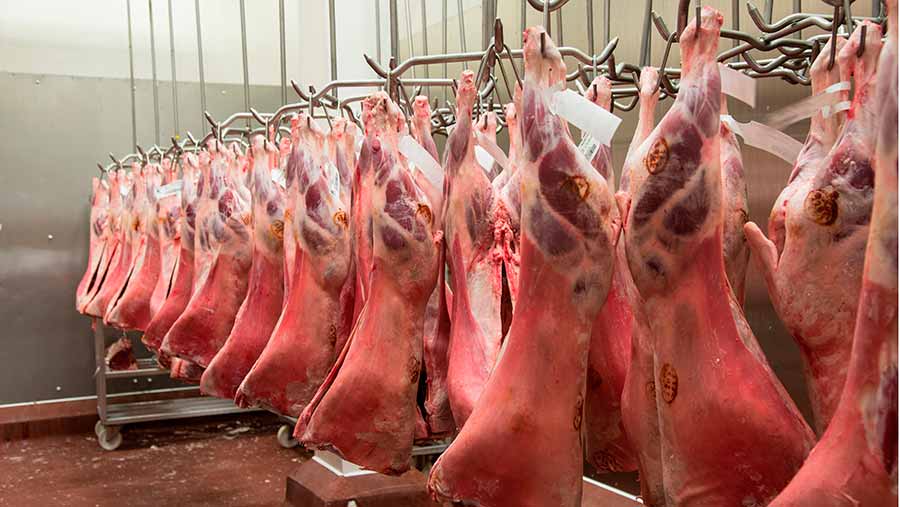 Prime lamb prices have started to pick up as festive demand kicks in.

In the liveweight trade, the British standard quality quotation (SQQ) jumped 10p/kg to 171.6p/kg in the week to 23 November.

Values were about 15p/kg on the year, according to an AHDB report.

The deadweight trade has yet to react, with the British SQQ dropping 4p/kg to 379.8p/kg in the week to 19 November.

He said festive demand was helping, but plentiful numbers of heavy lambs and weak export business could rein in any rises.

“With the festive demand, [buyers] are all looking for legs of lamb and suddenly there is a bit more trade,” Mr Wrench told Farmers Weekly.

“The supermarket buyers are now all here, whereas a few weeks ago they had their hands in their pockets.

“The export is not looking particularly well at the moment. So that will temper the festive demand.”

Two-fifths of all UK lamb is destined for the EU, so prices will always be sensitive to the exchange rate and demand in foreign markets.

In September, British farmers exported 7,314t of fresh and frozen sheepmeat, down 17% on the year, though the statistics have been questionable.

The pound plunged against the euro over the summer, in the aftermath of the Brexit vote, which made British lamb more competitive. But sterling has crept up over the past month, which had the opposite effect.

Paul Ashton, Greenslade Taylor Hunt associate and auctioneer at Sedgmoor Auction Centre in Devon, said the trade had been sliding until last week.

He had not seen a spurt in supermarket demand, as it was the time of year when retailers start buying in more New Zealand lamb.

“Numbers dried up enough following the wet weather,” he said. “The trade had been slowly slipping back, but [in the past week] it has rocketed. It has gone through the roof.”

Analysis by AHDB suggests sheep farmers’ returns could increase for the rest of 2016.

Looking at national returns from lamb sales, the levy board found a mix of lower production and lower prices in the first half of the year led to a sharp drop in income.

But in the third quarter, with the post-referendum currency slump and continuing low numbers, the trade avoided its seasonal decline, pulling total returns up 13% on the year.

Over the whole nine months, once adult sales are included, overall returns were 1% lower on 2015 levels.

Looking ahead, the levy board noted that prices were still higher, sterling was unlikely to move dramatically and lamb production was likely to pick up into early 2017.

“If prices remain above last year’s levels, this could lead to returns remaining well above year-earlier levels,” AHDB said. “However, this will be dependent on demand, both domestically and for export.”