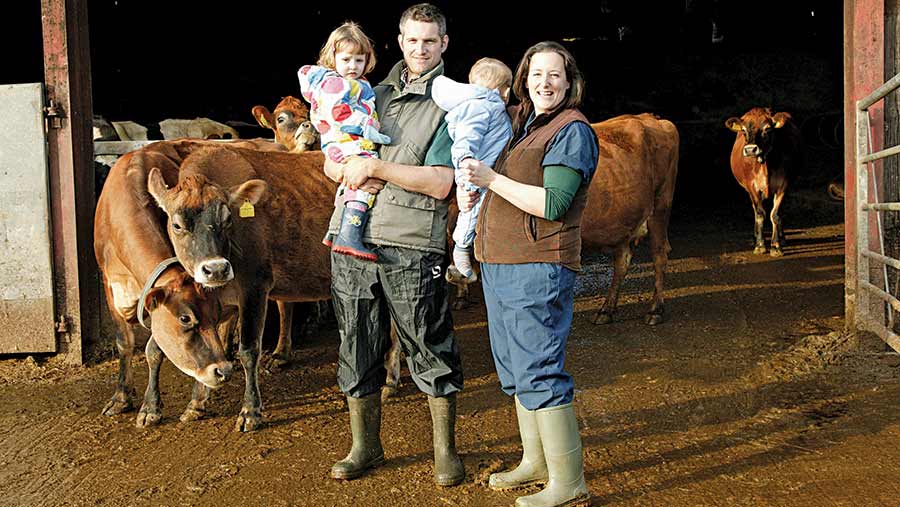 Tenants and new entrants Stuart and Caroline Perry used a government scheme to borrow more than the bank was happy to offer on normal lending criteria.

When they wanted to expand their Devon dairy business last year, the couple were able to offer little security and had only a short track record in business, having started farming in their own right relatively recently, in 2013.

The Perrys began milking at Nower Farm, Kilmington, near Axminster, in January 2014, at a time when milk was worth about 32p/litre and processors were looking for more supply.

They had taken on the tenancy of the 193-acre farm the previous year.

The redundant dairy unit had previously been let to Stuart’s family on an annual grazing agreement, but the owner was looking for a longer-term arrangement.

“I knew the farm well already,” said Stuart. “It’s mainly permanent grazing with some hilly areas and had been used for sheep since the last long-term tenant had quit dairying.

“While the soil fertility needed improvement and the hedges were overgrown, all the old dairying equipment – including a 16:16 herring­bone parlour – was still in place.”

A settlement from Stuart’s family business gave the couple 51 cows, a calf and a tractor. The couple also used their own savings and took a bank loan of £60,000, guaranteed by Caroline’s parents, to carry out the initial repairs and buy and install cubicles.

Profits were reinvested to buy more cows, and by early 2015 the milking herd had grown to just over 100 cows.

But more cows were needed – pedigree Jerseys this time to make their constituents-based contract more profitable as the milk price kept falling.

“And we needed to build a new silage clamp to take the crops from our extra grass cuts and maize,” says Caroline.

But because they had a short track record, few assets and little security, their lender – Lloyds Bank – could not offer them the amount they wanted.

However, the bank suggested using the backing of the government’s Enterprise Finance Guarantee (EFG) to offer the Perrys a five-year loan of £55,000.

The terms from EFG also meant that capital repayments could be put on hold for a year.

The Perrys pay 2% a year as a guarantee premium direct to the government on the reducing balance of the loan throughout its term, while the loan itself is at a rate typical for farm borrowing.

About two years on from the start of milk production, the Perrys are milking 135 head with an average yield of 9,000 litres.

They are full owner members of the Arla milk co-operative. Their new silage clamp is built and the Jerseys are keeping the contract as profitable as it can be at current milk prices.

“We constantly scrutinise everything, rebudgeting and recalculating our cashflow situation and negotiating the very best prices we can,” says Caroline.

“And it’s working because our costings tell us we have a low cost of production. However, we are losing out at the moment due to the milk price.

“So I can’t say it’s all super-cheery when I sit down to do accounts. It doesn’t look as if milk prices will improve until very late in the year but we now feel we can ride this out.”

Further diluting fixed costs is the next stage, says Stuart, so the plan is continued expansion up to 250 cows – but everything hangs on the milk price.

“We have opportunities to work with neighbours to grow winter feed so we can get bigger on our existing acreage,” he says.

“It’s just milk price and cashflow holding us back at the moment.

“Yes, things are tough but we love what we do, we know we’re efficient at what we do, and we’re confident we have a way forward.”