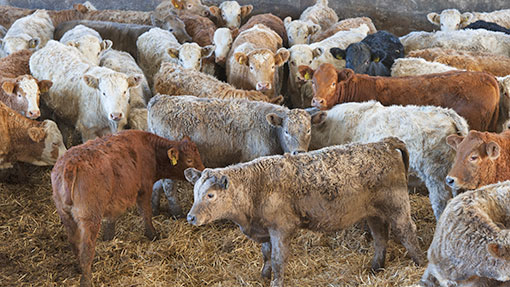 Tumbling finished cattle prices have squeezed the value of store animals at livestock markets since the start of the year.

In England and Wales, the average price for two-year-old continental steers fell 12% between January and May, but the value of yearlings was only 1% lower.

“Younger grazing cattle have not been affected as much,” he said.

“With the amount of grass there is compared to last year at this time clearly there is more optimism and farmers do not like wasting grass.

“Those young grazing cattle are every bit as dear as they were this time last year, but cattle closer to finishing could be £200-300 cheaper.”

Mr Donaldson added that this was a gamble as it relied on better finished prices in the months ahead.

“There is no doubt that if the finished prices start to improve then you will see a bit more confidence in these forward cattle,” he said.

AHDB/Eblex senior analyst Paul Heyhoe said the better performance for yearling cattle was likely due to tighter supplies, with British Cattle Movement Service data showing the number of younger cattle was lower than a year ago.

“There might be some hope among finishers that these cattle will be entering the market at a time when the trade has improved as supplies tighten both in the UK and Ireland,” he said.

Ready overall cattle supplies so far this year have caused variation in the performance of different types at market.

Dairy-bred animals saw the biggest reductions between January and May, with the average price for two-year-old steers falling 16% and yearling values down 12%.

In contrast, two-year-old Hereford steers were worth 2% less on average and the price of yearlings was 15% better.

William Probert, from RG & RB Williams in Ross-on-Wye, said the dairy trade had suffered, with abattoirs discounting those cattle on their grids.

“The dairy trade has got harder, especially for the Friesian bulls, while the trade for Hereford cattle has picked up,” he said.

“For Hereford or Angus crosses with a named sire there is a premium price and they are making significantly more pence per kilo.”