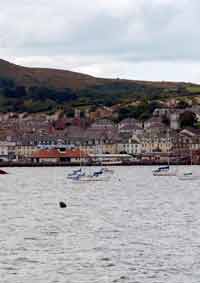 Dairy co-op First Milk is to stop production at its loss-making Rothesay creamery on the Isle of Bute, bringing to an end 40 years of cheesemaking at the site.

The co-op has, however, committed to continue collecting milk from the 14 dairy farmers on the island and transport it to the Scottish mainland for processing.

“Despite our sales team working hard to secure a profitable customer base for cheese produced at the site, the creamery is severely under-utilised,” said First Milk’s executive director for cheese, Kate Allum.

“Having assessed all our options, we believe that stopping production is the best route to protect the returns we can pass back to our farmer members.”

All milk produced on the Isle of Bute goes to the Rothesay creamery, but the volume available on the island has declined by more than 25% over the last two years.

Up to 19 people are expected to lose their jobs as a result of the closure.

NFU Scotland president Jim McLaren said that securing fair returns from the cheese market in recent times had been very difficult. “This highlights that even high-value, branded product, such as the Isle of Bute cheddar, has struggled to generate viable returns.”

Mr McLaren blamed those buyers who continually screwed down the price paid for a quality product, while extending their own margins and undermining more remote milk fields.

“We welcome First Milk’s continued commitment to collecting milk on the island and delivering it to the mainland and that the current milk price will be maintained,” he added.

First Milk has 550 members in Scotland and operates creameries at Campbeltown and on the Isle of Arran, as well as supplying milk to Robert Wiseman Dairies and Nestle.