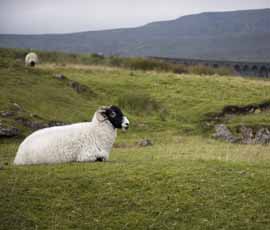 Better margins can be earned by Less Favoured Area sheep producers if they concentrate on achieving better physical performance in ewes and lambs.

This is the biggest driver towards better results, says EBLEX, which is looking to recruit new beef and sheep members to a free costings service called Stocktake.

Net margins for LFA breeding flocks rose by nearly £4 a ewe to £7.80 a head in the year to the end of March 2011. Figures from the Business Pointers series showed that poorer performers need to concentrate on output to move their results closer to top third performance, said EBLEX.

“Whereas in some of the other enterprise types we have seen a huge difference in costs, particularly fixed costs, between the top third and bottom third producers, there is much less variation for LFA breeding flocks,” said Mark Topliff, EBLEX senior analyst.

Areas with potential to significantly improve returns include lambs born and reared per 100 ewes, return per lamb sold finished and lamb weights.

However, it was still very important that producers kept a close eye on costs and in particular labour where there was a £5.83 a ewe difference between top and bottom third producers, said Mr Topliff.

The Full Business Pointers report, and a breakdown by enterprise, can be found online. 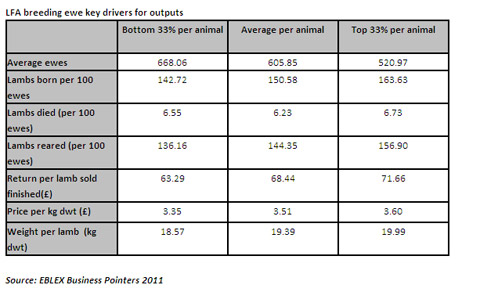