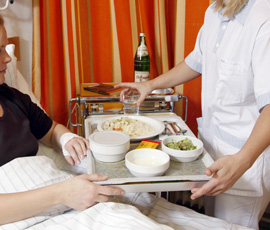 Farmers should be focusing on public sector supply chains, instead of complaining about supermarkets, according to a former government adviser.

The public sector, not supermarkets, is where the real supply chain problems are, said Lord Christopher Haskins, former chairman of Northern Foods and the “rural tsar” to the government during the foot-and-mouth outbreak in the early 2000s.

Relationships between retailers and the supply chain are much closer than those in the public sector and catering, and consumers and producers are at risk of losing sight of this, he said.

“The real problems are not in supermarkets but in restaurants and hospitals,” he told Farmers Weekly. “You just have a plate put in front of you and you can’t be sure what it is and where it’s come from.”

Supermarket supply chains are a lot more organised, whereas hospital supply chains, for example, can be confusing, Lord Haskins added.

“There are too many suppliers and chains are too complicated. Why is meat going from one European country to another to another before coming here?”

While there is price pressure on farmers and processors from retailers, the real pressure comes from cheaper markets, and it is the public sector that is responsible for pushing prices down.

“Farmers complain about Tesco but yet the biggest prize in farming is a Tesco contract,” said Lord Haskins, who now has a pig business in Driffield, East Yorkshire.

Changes have already taken place in supermarket supply chains, he said, which have benefited farmers in the UK. But the public sector still has a long way to go to shorten and simplify its supply chains, he added.