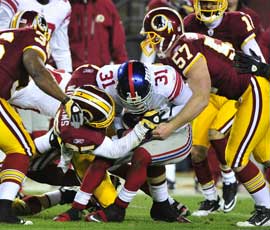 Poultrymeat producers in the US have expressed fears a looming lockout of NFL players due to a spat with management over wages and profit sharing might see sales of chicken wings crash.

Chicken wings, especially spiced ‘buffalo wings’, are a sports bar and stadium favourite in the US with the National Chicken Council(NCC) saying almost 1.25bn chicken wing portions are consumed on the weekend of the Superbowl grand final.

Joe Sanderson, chief executive of Sanderson Farms, the largest supplier of chicken wings to the food service industry in the US, told Reuters he feared an NFL shutdown could cripple the industry.

“It would be very bad for chicken wings and I do not know to what extent it would be bad for other products they sell in those watering holes or sports bars. It would not be good, I’d tell you that,” Mr Sanderson told the Reuters Global Food and Agriculture Summit in Chicago.

NFL players have been locked out since last Friday when discussions between them and owners collapsed leading to players filing antitrust suit against the owners. The case is expected to be heard in the federal court in April.