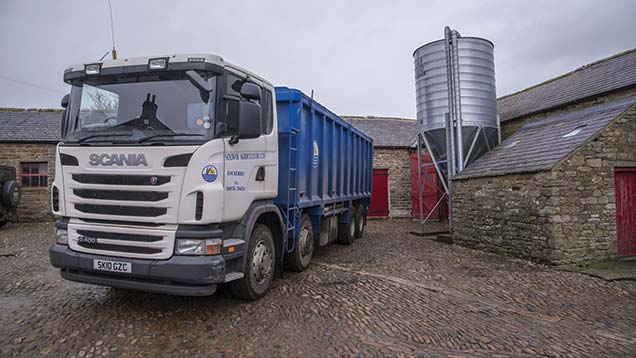 One dairy farmer has used precise feed planning to improve his business consistently over the past twenty years.

Derrick Davies, who milks 300 cows near Reading, Berkshire, buys rape, soya meal and soya hulls to supplement the grass and maize grown on his farm.

Each year he analyses his forage and draws up a ration for the rest of the herd’s requirements.

To do this, he uses his targets for yield, the number of cows in milk and the days in milk.

He sells his milk to Marks & Spencer, which gives him a fixed milk price for six months, so he can work out what margin he can make in the year ahead.

Mr Davies then heads into the market to buy what feed he needs for the next 10-12 months. He tries not to buy spot if he can avoid it.

“We have got a very good idea of what we want because we have set our targets,” he says.

“Once we know what we are going out for, we go to the market and see what is out there.”

“And we can budget as I know what milk price we have. It’s a bit like having a salary, when you know what your mortgage is and what your outgoings are.”

But Mr Davies doesn’t do all the dealing himself – he employs his farm business consultant to make contact with the feed companies for him.

They typically get three to five quotes, which can be fairly similar as they are for large tonnages at a time.

“I am a great believer in surrounding yourself with professional people who know markets and what is happening,” says Mr Davies. “Cheap advice can be very costly.”

“They know who to approach, how to approach them and they have the time to do the legwork.”

The other big advantage for Mr Davies is being part of a buying group. The group employs the consultant, who can negotiate large deals with the feed companies.

Mr Davies believes the benefits can be the same for groups of any size, from six farms up to 60.

“When you have good volumes of tonnage you can negotiate with the companies pretty well,” he says.

“It is a great advantage if farmers can sit down, talk together, share what they are getting and be prepared to trust that it will work. Nine times out of ten it has worked.”

Farmers can help themselves through the dairy downturn by buying their feed requirements months ahead.

He said buying six months’ cover on starches and six to nine months’ proteins could be sensible – as prices for both were currently reasonable.

Some products, such as succulents, had to be paid for upfront, so farmers might have to think carefully about cashflow, Mr Keiley said. Producers needed to budget and see what money they had to spend and what their milk output would be.

“Our clients that have been in the forward market have generally won and taken product when they think it is a good price for them.

“Up until they crash, they were consistently taking a good margin. Given the price for milk and the outlook for the milk market in the medium term, you need to be locking in a margin for your milk production.”

Mr Keiley said farmers could also put out a number of tenders to different feed suppliers to see what deals were available. This is what he had done at Crichton Royal Farm in Dumfries, speaking to nine different merchants, which returned a wide range of prices.

He said farmers should focus particularly on the nutritional needs of the best feed convertors – freshly calved cows.

“Be specific, work with your nutritionist and target your most efficient convertors,” Mr Keiley said.