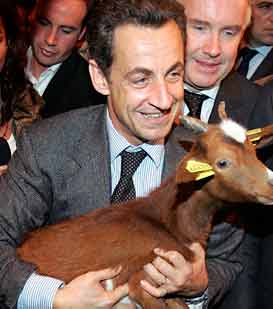 French president Nicolas Sarkozy has offered farmers a €1.65bn aid package to help them through the current financial crisis.

In a lengthy speech to French farmers and politicians in eastern France this week, the President outlined what he described as an “exceptional” crisis affecting all sectors of farming.

While retail prices had dropped by just 1% over the past 12 months, agricultural prices had fallen by 20%.

“This crisis touches the heart of our society,” said Mr Sarkozy. “It attacks a strategic sector that makes up an absolutely inescapable element of our national identity.

The French government’s response was to put in place a financial rescue package for agriculture.

This would include €1bn in government subsidised bank loans, with interest set at 1.5% for five years, and €650m of state aids, including:

Mr Sarkosy acknowledged that the package would have to be approved by Brussels, but was confident this would not be a problem.

But a spokesman for the EU Commission said that formal notice of the aid package had not been received – indeed the first the commission was aware of it was through media reports.

“The EU Commission expects to be notified in line with the applicable rules on state aid,” he said. “We will examine these aids to establish whether community legislation is respected.”

The statement was made on the same day that the commission confirmed it had included agriculture in the so-called Temporary Crisis Framework, which allows member states to pay up to €15,000 in state aids per farmer until the end of next year.

The framework is designed to help businesses thorough the recession.