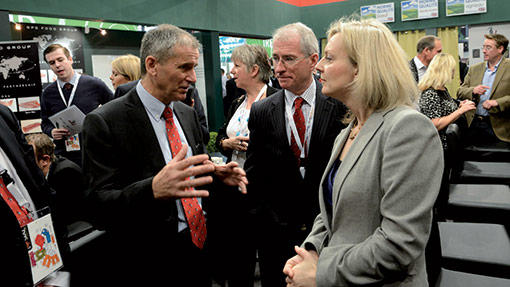 The fortunes of British livestock farmers depend, at least partly, on the French.

Our cross-Channel neighbour is the first destination for British lamb exports and French consumers are getting more of a taste for our top-quality beef.

Hard work is being done on the Continent to make sure British red meat has greater prominence in the baskets of French shoppers.

As part of this push, British beef and lamb was getting the hard-sell at the world’s second biggest food show last week.

Eblex export manager for France, Rémi Fourrier, was in charge of the English presence, themed like a traditional pub serving warm ale and bloody steaks. “We cannot not be here, it is just not possible,” he says.

The French market is essential to British red meat and for lamb in particular. About one-third of British lamb is exported, with France buying almost half of shipments.

France relies on British production: the UK counted for 42% of French sheepmeat imports last year and more than one in four lambs eaten there was British.

“With sheepmeat we have got the [volume of] product and we never have a problem with quality,” Mr Fourrier says. “It beats every other lamb by far and it has a short supply chain.

French farmers do not see British lamb as a threat because they are far from self-sufficient, Mr Fourrier says. That is, until prices are driven low by an influx of New Zealand or Australian meat.

The challenge to sell more to France will be the exchange rate and reversing a slide in consumption.

Sterling has been at two-year highs against the euro, making British lamb more expensive to buy.

Exports were back 5% on the year in August, a factor in the sharper-than-usual seasonal slide in British lamb prices this year.

Also, sheepmeat consumption in France fell in 2013 for the eighth year running.

But Eblex has just had EU funding confirmed for a three-year £6.17m campaign to get younger shoppers in Europe cooking with lamb, working with levy boards in France and Ireland.

It builds on the “Agneau Presto” initiative run for the past six years, which helped increase young people’s lamb purchasing by 3.5% in 2012 and 1% in 2013.

However this doesn’t mean British farmers can’t compete at the premium end as well.

France accounts for about 50% of exports of protected geographical indication Welsh lamb, worth £71m in 2013.

“[Welsh] has become synonymous with quality: we are selling the environment, we are selling Wales internationally and people are buying into it,” she says.

Selling beef to the French is a different question.

About 12% of British production is exported and France buys just over one-tenth, which accounts for just 4% of its imported supplies.

“We are not a big player on the beef side,” says Eblex’s Mr Fourrier. “We won’t be able to produce like the Argentians and Brazilians so we need to be on the quality side of things.”

Eblex’s trade strategy is to position English beef as a premium, grass-fed, matured product, typically for use in restaurants.

French supermarkets are less keen on British beef as the tighter supplies mean they look to sources where they can guarantee a regular flow of product.

The levy board is making links with butchers and chefs, hoping they can become ambassadors.

There are already some British beef evangelists, like the colourful Parisian butcher Yves-Marie Le Bourdonnec (see above).

Eblex also plans to rebuild the trade in cow beef to France. Older meat is more popular there, with 60% of supermarket supplies coming from beef and dairy cows.

Before 1989 and the BSE export ban on British beef to Europe, the UK exported 50,000t of cow beef to France a year. Now most is shipped to Ireland or the Netherlands, where it can be processed and sold elsewhere.

This means that just under a quarter of French beef imports originate in the UK. “It is very frustrating because who benefits from the added value?” says Mr Fourrier.

On the QMS stand at Sial, exporters had to stop taking orders for Scotch beef after the show’s first day, such was the demand for high-end product.

QMS head of marketing Laurent Vernet says it was not the name of the country that mattered, but the quality of the beef. “On beef, we do not have enough,” he says. “It is an established product with a reputation.”

Gallic butcher with a tast for English beef

A love affair with English beef has made Yves-Marie Le Bourdonnec the enfant terrible of French butchery.


In the newest of his four Parisian shops, a 15sq m boutique in an upmarket area, English beef is the star attraction.


Marbled ribs aged for up to 60 days in a soft-lit glass cabinet.


Mr Le Bourdonnec’s shop is unashamedly high-end but he has a regular stream of customers arriving every day for fresh meat.


He says French butchers are only just catching on to the trend of ageing meat, but the leaner native breeds they typically use are not suited to the process and are finished too old.


He wants his country’s producers to cross the likes of Blonde d’Aquitaine with English breeds such as Hereford and Angus, switch to finishing on grass and try to slaughter them earlier.


He believes French shoppers will love grass-fed English beef as soon as they eat it – even if it costs more.


“The first time they try it they say, ‘Wow’. English beef is real value for money and French beef is a false saving.

British processor with a Francophile focus


The family firm kills about 15,000 sheep a week from across the UK. It sells carcasses to European destinations and ships fifth-quarter products to the Far East.


But France remains its top market, accounting for about 60% of its business.


“The UK is the number-one place for the French to buy their lamb,” says executive director Rizvan Khalid.


Euro Quality is strict on its specifications, requiring lambs to have a good confirmation and fat between a 2 and 3L. Everything killed is halal, which is an advantage in markets like France, where the population is 5-10% Muslim.


Mr Khalid says Mediterranean countries on the Continent typically take a lighter lamb than the British, up to about 21kg.


But the food service sector might take animals up to about 25kg.


He says the UK has inbuilt advantages as a sheepmeat producer, with good grazing conditions and lower-cost farming systems creating a high-quality, well-priced product that meets foreign demands.


“In the UK we are blessed that we have a variety of breeds and landscapes so we can source what we need,” Mr Khalid says.


“A lot of New Zealand stuff going to China means less product is available on the world market, so there is an opportunity there.


“The UK is the third biggest country in the world for export share and I can only see that growing.”