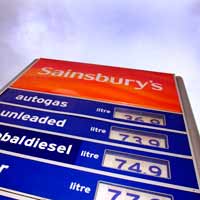 Britain’s third largest supermarket, Sainsbury’s, increased pre-tax profits by 7% to £712m in the year to 17 March 2012.

While Sainsbury’s general merchandise and clothing businesses continued to grow faster than its food business, the supermarket said fresh food remained central to its success and was a key “battleground” for UK supermarkets.

There was strong growth in sales of its own label ranges, with Taste the Difference up 8.2% and basics up 6.8%. But while there was a focus on value ranges, it said it remained committed to welfare and values.