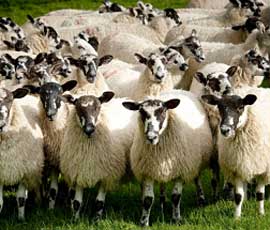 Higher beef and lamb prices have helped many producers back into the black over the past year, but the financial gap between the top and bottom third continues to widen, according to EBLEX.

Full results from its Business Pointers benchmarking report show net margins before non-cash costs – such as unpaid family labour and rental value of owned land – have improved for most beef and sheep producers, on the back of stronger markets and improved physical performance.

But those in the bottom third still struggle make a positive margin after cash costs and many other enterprises are forced into the red when non-cash costs are included. That meant even some of the best-performing businesses were still reliant on the single payment and stewardship income to make a profit overall, EBLEX senior analyst Mark Topliff said.

“Higher output prices are helping a resurgence in the beef and sheep meat sector, which is reflected in the year-to-date figures contained in the report. But when you look purely at what individual enterprises earn, unfortunately many average and bottom third businesses are still making a negative margin.”

Results for the average performing enterprises showed cattle herds were generally the worst off, with sheep units generally showing an improvement compared with the previous year. The gap between the top third and sample averages appeared to have widened.

Producers in the top third generally had a better awareness of managing their business and used a range of information to source cheaper inputs, Mr Topliff said. They also tended to have a better handle on labour and machinery costs, which remained a major challenge.

The report showed a marked improvement in physical performance among beef and sheep enterprises. Notably there were fewer calf and lamb deaths, fewer barren cows and more calves and lambs reared in the year to March 2011, than the previous 12 months.

Mr Topliff was also optimistic that prices would hold firm for the foreseeable future, as supplies of both beef and sheep remained tight and exports continued to benefit from the relatively weak sterling. Meat demand was also holding up well, despite tighter consumer spending, helped by a large number of supermarket promotions.

“The fundamentals are unlikely to change in the next few months, so I’m still fairly positive about the future,” he said.

For the first time, EBLEX will update its benchmarking figures on its website every month to help producers benchmark their own performance on an ongoing basis. 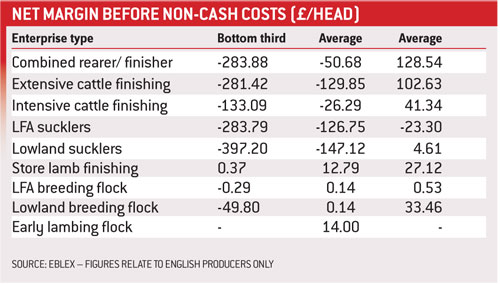