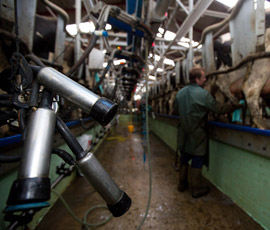 The bonus was introduced a year ago and previously paid to those farmers who produced the same as, or more than, they did in the same month a year earlier.

However, from the start of July it will be paid to all producers, regardless of production levels.

The cheese-maker said the bonus was permanent and it had no plans to change it.

Glanbia has around 250 suppliers across the UK,

Suppliers are paid 30.3p/litre before the bonus.