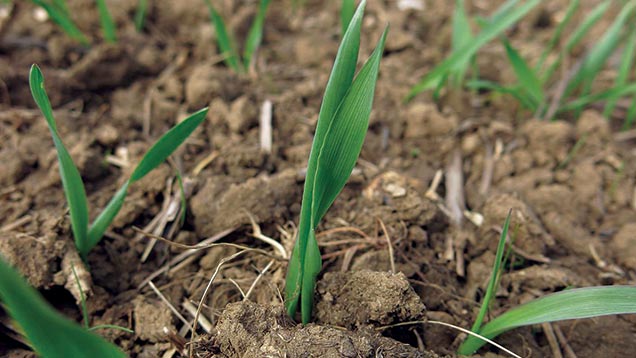 High stocks of unsold UK grain combined with early reports of strong cropping worldwide will make for a nervous market in the next few weeks, says Nidera’s David Eudall.

International grain traders have one eye on the weather and the other on reports of the area and condition of crops in the ground.

Every rain shower and heatwave is monitored so closely there is a market reaction nearly every time a new weather map is produced.

Long-term fundamentals are difficult to gauge, with crops in many important areas just entering spring development, but several key market drivers for 2015 are becoming clear.

See also: Use your pension to build a new grain store

Dry weather in the US has been exerting particular influence on markets recently. For the past two months the main growing area of Oklahoma, Kansas, Nebraska and Texas has seen less than average rainfall.

Despite the largely dry conditions of the first quarter, the first US Department of Agriculture  crop condition report estimates 44% of the US winter wheat crop is in good or excellent condition – a significant improvement on the 35% rated the same this time a year ago.

Investment funds have been holding a significant short (sold) position in wheat markets, with the earlier dry weather resulting in short, sharp rallies as traders bought back positions to reduce the risk of prices rising further.

The recent rain will calm fears, but investment funds still hold large short (sold) positions that could lead to further short-term rallies in the next eight to 12 weeks. The many growers with old-crop still to sell need to be watching out for these.

Ironically, US corn planting due to commence any time could be delayed by the heavy rainfall predicted, but this will really help with subsequent crop establishment.

USDA reports estimate 36m hectares of corn will be sown this spring – down 2% from a year ago, but still expected to provide ample supply, barring any major weather issues. An increase in US soya bean plantings is also forecast.

Rainfall has not been a problem across Russia and Ukraine, although very cold conditions in certain areas put a check on crop development through winter.

A recent crop tour of the Ukraine reported wheat sowings were in a good or very good condition, but the state of the Russian crop is more difficult to establish as it has only just broken dormancy.

European crops are all classed in a good condition, with the French crop looking exceptional – a recent survey showed 91% in a good or excellent state.

All in all, the short-term direction of the market will be largely influenced by the development of crops through April and whether we see any periods of prolonged hot, dry weather – particularly in southern Russia – that could disturb spring development.

Without a major weather event and with crops generally in a healthy state – in many cases better than last year – 2015 could well be another large worldwide harvest.

Add in large old-crop stocks to the global picture and it is difficult to see anything other than a steady erosion in prices longer-term.

While the world is focused on the development of crops through the spring, the UK has its own particular supply-and-demand position to wrestle with.

Many grain stores across the country are still full, with estimates suggesting more than 2.5m tonnes of wheat could be carried over this season. This is one of the largest carryovers on record.

This volume carried into harvest is likely to put extra pressure on new-crop supplies, which are already looking uncompetitive relative to the rest of the European export market.

Growers expecting any sustained lift in domestic prices over the next few months are likely to be disappointed.

Crop conditions across the northern hemisphere continue to improve as we move through spring and beneficial rainfall heads across growing regions. Large old-crop stocks and a potential for ample supply again this harvest continues to exert downward pressure on values.

Russian crop development was curtailed through the winter by cold temperatures and lack of snow cover. If there is going to be a disruptive weather issue, here is the most likely place to look.

Investment funds continue to hold large short (sold) positions. If we do see a return to unfavourable weather forecasts, the funds could buy back positions rapidly to take risk out of their trading portfolio and this could create short-term rallies.

Nidera UK is part of global grain trader Nidera, which operates in 22 countries. One of the UK’s key grain exporters, it is based at Ipswich, Suffolk, with regional offices in Yorkshire, Norfolk and Hampshire.