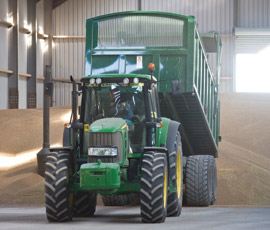 Grain markets could continue to fall as the chance of poor US weather looks less likely.

Prices have been steadily falling for several months as good harvest prospects across the northern hemisphere look more certain, according to Jack Watts, analyst at HGCA.

Hot weather and thunderstorms in parts of Europe at the start of August did little to dampen expectations, while cool weather in the USA also bolstered predictions of a record maize crop after 2012’s drought.

“The risk of excess heat in the USA is passing and it is more likely we’ll see the forecast rebound in production,” said Mr Watts.

Markets have responded by continuing to slide and, if production estimates in the northern hemisphere are realised, there will be more downward pressure on prices in the autumn, he said.

Consultant Leo von Kameke from analyst ODA said growers are seeing the beginnings of a sluggish feed cereals market, while Simon Ingle, head of central stores marketing at Openfield, which markets 20% of the UK’s grain, said the combined effect of lower prices and lower premiums will be difficult for farmers.

“It’s going to be relatively uncomfortable for farmers to see prices fall on a daily basis, coupled with drops in premiums,” he said.

“At the front end of the season it’s hard to see any notable recovery, but there is still a long way to go, as it’s still the early stages. It only takes a crop problem elsewhere, such as early frost or constant rain in the USA, which is still possible, to reverse this,” he said.

Futures markets have also fallen in line with spot prices as people start to focus more on harvest 2014 and lock in prices. Selling in a forward position could be one way of maximising returns, Mr Ingle added.

Until harvest is well under way the picture remains hazy for milling wheat, but milling markets have tightened and the premium looks as though it will stay strong, said Mr von Kameke.

Domestically, 10.5m tonnes is predicted, but it now looks as if the UK will harvest 12.5m tonnes, said Mr Ingle.

This year the total wheat area is about 1.6m hectares, down 19% on last year.

The UK should anticipate exporting some of this season’s feed barley, said Mr Watts.

A much greater area of spring barley has been planted than last year, up 54% to 922,000ha, after farmers replaced struggling winter wheat with the crop. Barley production wis likely to reach 6.8m tonnes, according to ODA, of which 5m tonnes will be spring barley.

The malting premium has remained stable, only starting to fall last week, but if it continue to erode, farmers may have to sell malting quality as feed instead, said Mr Watts. If the quality of the harvest is very good, the premium could diminish to nothing.

However, the malting market wants to see the full spectrum of quality before it makes its move, and producers could still retain a premium if maltsters hedge against the uncertainty of 2014 and secure supplies now for next season, said Mr Watts.

Increased global production forecasts, good yields in the East and the prospect of depressed oils markets going forward have seen oilseed rape prices fall during the past few months. This trend is likely to continue with Europe’s biodiesel policy under review.

Farmers have avoided selling rapeseed ahead because they are unsure of what kind of yields they can expect, said Mr von Kameke.

UK production is likely to be below 2m tonnes, ODA estimates, while global production forecasts were revised up – the highest for three years in Europe and a probable record from the Black Sea region, so the prices of Euronext rapeseed may not hold out. However, European prices are low compared with other international markets, so the potential for further falls could be limited in the short term.