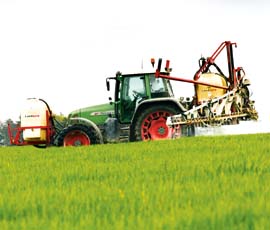 Grain prices have recovered most of the ground lost since the disaster in Japan and conflict in Libya, but are lingering just short of contract highs.

Futures contracts for May delivery reached £210/t as Farmers Weekly went to press, with ex-farm values a fraction under £199/t on our weekly survey of traders.

Merchants were offering £1 a month carry but most said there was little trading taking place as most users had secured supplies through to the end of the season.

London wheat futures escaped most of the effects of profit-taking by investors this week after investment bank Goldman Sachs recommended its clients reduce positions in commodities.

While this caused greater movement in other markets – Chicago May wheat slid 4.9% to just over $7.59 a bushel – London wheat showed little change, with November 2011 contracts trading £1.25/t lower.

Goldman Sachs’ advice seems to have been driven predominantly by its assessment of oil prices. Reports said the bank remained bullish about food commodities.

Frontier Agriculture’s trading director Jon Duffy said: “Something like the Goldman Sachs statement can move markets quite quickly, but at some point fundamentals have to rule, and that is what we’re seeing on old crop wheat at the moment.”

Old crop wheat was effectively sold out, Mr Duffy said, and it was accepted the UK would have to import wheat before the end of the season. “Exactly how much will just be a function of whether harvest is early or late.”

Most traders agree the new-crop market is searching for the next weather event or piece of news to give it fresh direction.

But the dry spring across most of Europe was not yet cause for concern, Mr Duffy said. “The drought has not yet begun to impact on yield. The focus is not Europe at the moment, but the US.”

Chris Tye, of Dalmark Grain, said new crop prices had also been influenced by last Friday’s report from the US Department of Agriculture. While US maize stocks were left unchanged, the USDA put wheat stocks up 0.93m tonnes at 183m tonnes.

Sterling fell to a five-and-a-half month low against the euro on Tuesday 12 April after an unexpected reduction in Consumer Price Index inflation weakened expectations of an interest rise in May.

While this rise should aid UK exports to eurozone countries, Jonathan Lane, trading manager at Gleadell Agriculture, said the UK had no surplus left to sell and was already pricing itself out of export deals. “We believe that to the end of March, exports were approaching 2.5m tonnes – compared with an exportable surplus in the 2010 crop of 1.3-1.4m tonnes.”

If sterling remains weaker against the euro, imports will begin to look expensive and may put upward pressure on prices for any remaining UK stocks this summer.