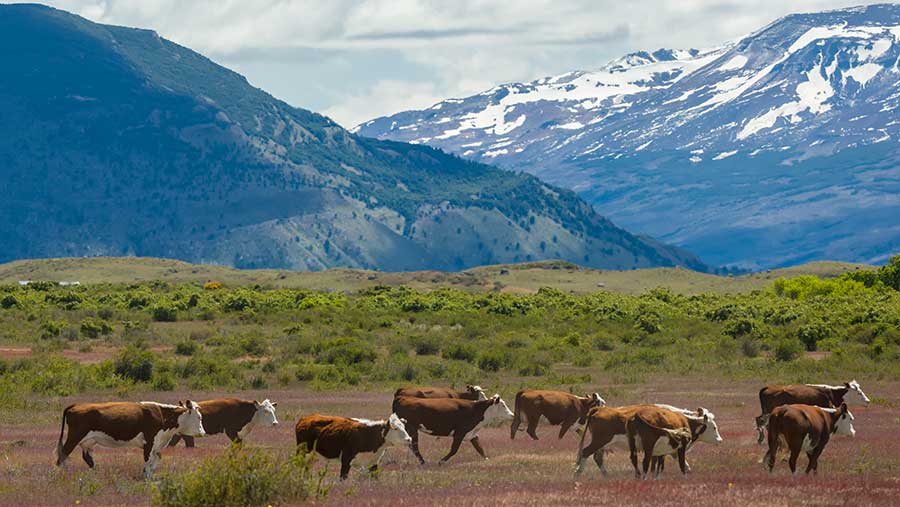 Increased beef production in Argentina, thanks to a changed political environment, means it could be set to take a larger slice of a new trade deal between the EU and Mercosur nations.

Talks between the EU and the Mercosur – Brazil, Argentina, Uruguay and Paraguay – appeared to culminate earlier this month with 99,000t/year of low-tariff beef reportedly allowed to enter the EU in return for lower tariffs on EU goods sent to South America.

This follows a period between 2003 and 2015 when the country almost disappeared from global beef export markets after a socialist, anti-farming government first stopped exports and then reopened them subject to huge taxes, in an attempt to drive domestic prices down.

As a result, beef became unprofitable and the national herd declined by 10 million head between 2008 and 2011.

However, a centre-right government elected in 2015 turned things around. As a result, the national herd is gradually growing and exports to the EU increased by 16% between 2016 and 2017.

Growing use of technology and increased efficiencies are also likely to drive Argentina’s cost of production down, and increasing the volume of low tariff beef it can send will increase the level of competition with British farmers looking to export to the EU after Brexit.

Argentina currently supplies beef to the EU under two main, high-quality beef quotas. Quota 481 is tariff-free and allows export of grain-fed beef reared on feed lots. This is set at 48,200 tonnes/year from the global market.

The Hilton quota is around 66,750 tonnes at 20% export duty, with Argentina taking 29,500t of that – the largest share of the quota for the Mercosur block.

The Argentinian Ministry of AgroIndustry predicts the country will fulfil 90% of its Hilton quota this year.

Future production increases are likely to depend on continued political stability, with the next election scheduled for 2019.

What’s happening in the UK market?

The most recent forecast on UK beef trade from the AHDB indicates that both import and export trade volumes are predicted to increase slightly in 2018.

Increased imports are predicted to come from Ireland, as production is forecast to rise there, and Poland, which sent 275,000 tonnes of beef to the UK in 2017.

This was an increase of 4.5% on the previous year, a significant increase particularly against a backdrop of a weaker pound.

However, domestic prices are not forecast to be hit significantly as a modest rise in exports is also predicted, alongside a small increase in domestic consumption, with UK consumers predicted to eat 1.2m tonnes of beef and veal in 2018.

The UK is currently about 75% self-sufficient in beef, with British farmers enjoying a market share of between 60-65% of domestic production.

By comparison, the EU as a whole was estimated to be 103% self-sufficient in beef in 2017.