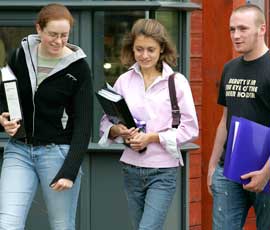 Harper Adams has become the latest university to announce that it is setting its tuition fees for 2012 entry at £9,000 a year.

It follows the decision by the Royal Agricultural College, University of Nottingham and University of Reading to also charge the full amount possible.

Principal David Llewellyn said: “Harper Adams University College has not taken lightly the decision to place its fees at this level. Careful consideration has been given to the high cost of our subject base, but also to the impact of higher fees on students.

“With this in mind, a significant investment is to be made in targeted bursaries, scholarships and other financial support. Setting fees at this level is a reflection of the cost of maintaining the highest academic standards and quality of student experience, which underpin the value of a degree from Harper Adams.”

Harper Adams’s has pointed out that for four years running it has achieved the accolade of “Best University College” from The Sunday Times.

The institution says it also has an employability rate of 96.5%, placing it sixth out of 156 institutions and the highest in its specialist sector.

Students will not be charged £9,000 during their placement year, but instead a nominal charge will be made to cover student academic support during the year.