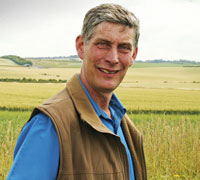 I got my first farm management job in 1983 and have employed summer students every year since then.

We usually take on four (and another on a year’s placement). We need a big increase in labour so it works for us and, for them, it’s a chance to make a decent pile of money. They see it as a chance to earn and learn a bit.

We want people with a driving licence and a basic level of competence with a tractor and trailer, even if they’re not necessarily the world’s best reverser.

I look for people who are enthusiastic and keen to learn and I tend not to be fazed by taking someone on who hasn’t got a lot of experience. I’m more wary of people who claim to have done everything and haven’t.

Of the four we take on, we usually go for a mix – I definitely need a couple who will hit the ground running, but if one is less experienced, that’s fine.

Students need to be hard working as we’ll often combine through to 10.30pm so it can involve 15-hour days. I want people who’ll turn up on time regardless of how late they’ve worked the previous night. But in return it’s important that I’m flexible. I’ll try to let them have the occasional day off where possible, which is important late on in harvest when everyone’s tired.

When you get students who know their stuff and learn quickly, it makes life straightforward and stress-free. If it takes someone 10 minutes to back up and tip a trailer, however, the whole day becomes more stressful for everyone.

Some farmers take them into their home, but our system means they have to fend for themselves. I avoid very young students and prefer them to be at least 18 as there are health and safety implications with workers younger than that.

The best ones are those who show initiative. If you’re sweeping up a bit of corn, for instance, you want someone to pick up a shovel without being told to. They’re the ones who’ll go far.

You also need people who will get on with each other and with the full-time team. It’s important they’re honest and up-front, too. We all make mistakes, but if someone does something – catch a shed door with the trailer, for example – they have to admit it. These things happen and we can cope if we know.

What’s important is not just that they can drive a tractor – but how they drive one. We want people who will look after the kit.

Students can be a bit heavy on the right foot, but that’s up to me as a manager and the full-time staff to manage that. It’s also part of their learning process – discovering the potential and limitations of different machines.

I’ve got links with Greenmount College in Northern Ireland so I usually find students that way, plus through contacts at Harper. If someone’s good, I’ll offer them a second summer’s work. I also encourage them to speak to other students who’ve worked here before they accept a job. I say: “This is what it’ll be like – but don’t just take my word on it”.

I like them to start before harvest so they can help with the preparation. That way, by the time the combines roll they’ll be familiar with what we do, they’ll know who’s who and they’ll know their way about.

Usually, two finish at the end of harvest (often they’ll want a couple of weeks’ holiday before returning to college) and the other two might stay on into the drilling season.

I set myself a target when I was a student: to save enough money to buy a car or to see me through the next term at college. Nowadays, in this age of student loans, it’s important to make some cash to help you through the academic year.

Those doing summer jobs often have accommodation provided and there’ll be no travelling costs so it’s easy to save money.

I benefited from having the experience as a student – so it’s nice to be able to give something back.

We don’t always do everything the best way but we hope to teach students some things that will stay with them. We try to teach the philosophy that harvest is all about preparation. It’s as much about what you do before you start, as what you do once you’ve started.

I usually get on with the students and they’ve been great to have around the farm. I even keep in touch with some. We went to one’s wedding last year who came here 10 years ago.


• Have you done any harvest jobs as a student? Tell us about your experiences on the Farmers Weekly forum.